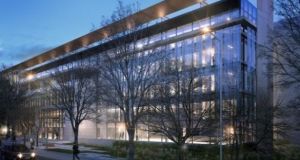 U+I’s Irish portfolio includes an interest in the Vertium office building, which was developed in partnership with Paddy McKillen, Johnny Ronan and Colony Capital.

UK property group U+I, which has more than £30 million (€35.3 million) in assets in the Republic, says it believes there are still significant opportunities in the Dublin market and expects to make further investments here in the coming year.

U+I, which has a £6 billion property portfolio centred on Dublin, London and Manchester, said it made a profit in Ireland of £9 million for the 12 months to the end of February. This compares to a £5 million profit a year earlier.

The company’s Irish portfolio includes an interest in the Vertium office building, which was developed in partnership with Paddy McKillen, Johnny Ronan and Colony Capital.

The letting of the 172,000sq ft building on Burlington Road to Amazon last year triggered a profit payment entitlement of approximately £4 million.

U+I was created following the merger of Development Securities and Cathedral Group in 2014. Dublin makes up about 16 per cent of the company’s development and trading portfolio.

The group said it delivered £35 million of development and trading gains from its planning-led regeneration activities for the 12 months ending February 28th. This is down from £51.1 million a year earlier but in line with guidance.

U+I reported a £400,000 pretax profit before exceptional items of £2.1 million relating to impairment of services office business. This compares with a £25.8 million profit in fiscal 2016.

During the year under review, four new large-scale Public Private Partnership (PPP) projects were won, adding £90 million to the company’s pipeline of gains from 2020 and £1.5 billion of gross development value to its portfolio.

The group said between £65 million and £70 million of development and trading gains were set to be delivered in 2018.

It added that investment portfolio values stabilised in the second half as it recorded an overall decline of £6.8 million during the year, due primarily to a big hit to transaction activity following the Brexit referendum last June.

“Improving the performance of our investment portfolio remains a key priority. We are focused on delivering a 10 per cent total return from our investment activities in the year ahead as we transition our portfolio to better align to our core regeneration expertise,” said chief executive Matthew Weiner.

“We are targeting £100 million of transactional activity this year with £18 million already in hand, and are set to deliver £5 million of value gain as a result of our proactive asset management.”

1 Michael Smurfit: ‘I asked Trump to invite me to the White House for my 80th birthday’
2 ‘I’m so lucky to be in the Caribbean – a million miles from Derry Girls’
3 Ryanair expects air fares to fall when flights take off again
4 Small businesses are cannon fodder in zealous anti-virus experiment
5 ‘The recovery needs to be a full-scale economic renewal’
6 Household savings soar as consumers stop spending
7 Revenue fears fraudsters tapped bank details of 3,000 taxpayers
8 Four things that could help Ireland escape from the Covid-19 recession
9 ‘Never mind GDP; the most fundamental job of any leader is to keep his people alive’
10 Amber offers free consulting services to solve Covid-19 problems
Real news has value SUBSCRIBE