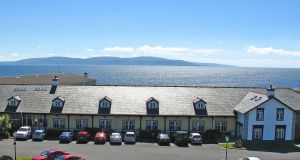 The Connemara Coast Hotel in Furbo, near Galway city, has extensive conference and leisure facilities.

The highly profitable Connemara Coast Hotel at Furbo, Co Galway is expected to attract Irish and overseas interests when it goes on the market from Wednesday through CBRE Hotels.

John Ryan of CBRE is quoting in the region of €12 million for the four-star, 141-bedroom hotel which has extensive conference and leisure facilities and is set on a spectacular 14.7-acre site overlooking Galway Bay.

The business is being sold on behalf of Charles Sinnott of Sinnott Hotels, which has traded successfully from this location for more than 30 years.

The Connemara Coast Hotel is on the R336 at Furbo, between Barna and Spiddal, and is within 10 minutes’ drive of Galway city centre.

It is strategically located along part of the Wild Atlantic Way, making it an ideal base from which to explore the rugged beauty of Connemara.

The hotel is on a gently sloping site with uninterrupted views of Galway Bay and beyond to the Burren in Co Clare. The hotel, which previously traded as Teach Furbo, was acquired in 1985 by Sinnott Hotels, which immediately embarked on a series of changes, upgradings and expansions to ensure it qualified for Grade A status.

The substantial investment over the years paid off. The hotel has 141 bedrooms, all with sea views, extensive conference and banqueting facilities, a variety of dining options, two bars and a fully equipped leisure centre.

Because of its setting and proximity to Galway, the hotel is a popular choice for leisure, conference and wedding business.

The hotel is being sold unencumbered and offers a new owner complete flexibility on branding and management.

Charles Sinnott said the hotel had always attracted a loyal customer base. The preferred route for the proposed Galway city bypass shows that it will link up with the existing road infrastructure close to the hotel, providing a pivotal trading position in the future.

1 My aunt never told us that Gran passed away with no will
2 Ryanair to slash 1,000 flights from August and September schedules
3 The $6bn judgment pitting Nigeria against Irish businessmen
4 If it’s safe to do so, could this be the time to spend for Ireland?
5 Netflix stock drops after downgrade by UBS analysts
6 Will Revenue come calling with tax bill if inheritance tax threshold falls?
7 Burger King to sell whoppers from cows that belch out less methane
8 Political row brewing if Ireland loses its appeal on Apple
9 Green Party TD queries ‘usefulness’ of another appeal in €13bn Apple tax case
10 Davy raises mortgage lending forecast as home listings rise
Real news has value SUBSCRIBE