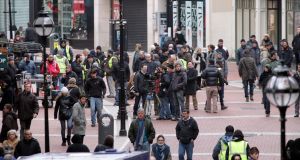 Dublin’s Grafton Street: Zone A rents are predicted to reach €7,000/sq m and increase at an annual average of 4 per cent. Photograph: Eric Luke

A new report on the five-year outlook for prime rents and yields across all sectors of the Irish commercial property market predicts that rental values will trend upwards and yield compression in the short term.

The analysis, by Cushman & Wakefield, is based on a “rigorous econometric model and qualitative analysis”, which assesses demand for commercial property as “strong” from both occupiers and investors.

With a large volume of office space under construction, however, the agent predicts rents will stabilise over the medium term. “No more than 9 per cent growth in prime rents is forecast through to 2021,” according to the report.

In terms of the Cork, Limerick and Galway prime office markets, Cushman & Wakefield sees strong rental growth out to 2021. Limerick rents are predicted to grow by 11 per cent per annum, with grade-A, spec-built office space topping out at €300/sq m. Cork rents, meanwhile, will hit €350/sq m by 2021, while Galway’s “critical supply shortage” is predicted to push prime office rents along at an annual growth rate of 7 per cent.

The analysis reports that prime Dublin office yields remained unchanged in 2016, at 4.25 per cent. This is expected to fall to 4 per cent over the next three years and then revert back to about 4.25 per cent by 2021, with “increase in supply” the key driver of movement in this variable. Little movement in office yields is also predicted out to 2021 in the Cork, Limerick and Galway markets.

In terms of retail, the agent is predicting year-end Zone A rents on Dublin’s Grafton Street to reach €7,000/sq m and increase at an average annual growth rate of 4 per cent out to 2021. However, it’s worth pointing out that at the end of 2016, these values were still 42 per cent off their 2008 peak.

Meanwhile, prime retail rents in Cork and Galway stand at about €2,250/sq m and should increase by 4 per cent per year out to 2021. Corresponding yields stand at 6 per cent in both locations and could dip slightly over the next three years. Limerick retail rents are predicted to increase at an annual rate of 5 per cent to 2021, with yields stable at 6.5 per cent.

Cushman & Wakefield says industrial units have the “strongest short-term rental growth forecasts of all sectors”, as well as the “highest total returns”.

In the regional centres, prime industrial rents reached €70/sq m in Cork and €75/sq m in Galway during 2016.

“Galway has seen the strongest rental growth over the last five years, and further upward rental value pressure is expected to continue,” according to the report. “Driven by a shortage of industrial stock, both Cork and Galway look set to reach rental levels of €85 per sq m by 2021.

“The Limerick industrial market lags behind, and stood at €48 per sq m per annum in 2016. However, Limerick has the strongest short-term rents forecast of the regional centres, with an average annual growth rate of 4.6 per cent for the coming five-year period, rising to €54 per sq m in 2020 and reaching €60 by 2021.”

1 Bank leaked my loan request to family who tried to rip me off
2 Ryanair and Aer Lingus monitor impact of coronavirus on travel to Italy
3 1,800 homes sign up as WiredScore rolls out build-to-rent certification
4 Boris Johnson's new immigration regime will damage much more than industry
5 Mastercard to create 1,200 new jobs by expanding base in Dublin
6 Hotels outside Dublin hardest hit by tourism slowdown
7 Ires hires contractor to build more than 60 apartments close to Croke Park
8 What are the tax implications of Mum gifting us the family home?
9 Barclays scraps system monitoring how long staff spent at desks
10 Best career advisers know plans not built to last
Real news has value SUBSCRIBE