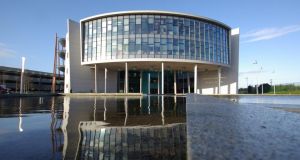 The new headquarters of the Office of Public Works in Trim: an architectural representation of the Tara Brooch 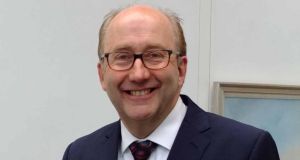 Maurice Buckley: “There’s a sort of a parallel development by the landlord of Apollo House and ourselves. It would be a fantastic regeneration for that area of Dublin.”

Even as Dublin office rents reportedly hit highs of €590-€645/sq m (€55-€60/sq ft), the Office of Public Works has managed to keep its average payment below that figure, according to the agency’s new chairman, Maurice Buckley.

“I don’t think we’ve crossed the €500 per square metre mark yet,” Buckley says when asked about the OPW’s average rent in the capital.

With a staff of about 2,000, the OPW is responsible for the ownership and stewardship of much of the State’s property portfolio, including national monuments and heritage buildings. It also has a major role in flood-risk management.

The agency is involved in the acquisition and/or disposal of commercial property for the State, as well as the provision of accommodation for civil and public servants, government departments and An Garda Síochána, among others.

The Department of Health is moving from Hawkins House to new offices at the former Bank of Ireland HQ on Lower Baggot Street, now known as the Miesian Plaza and owned by beef baron Larry Goodman’s Parma Developments company. Buckley says the OPW has secured this “fantastically refurbished block” for just under €500/sq m. At about 13,000sq m, this works out to about €6.5 million per annum.

As for Hawkins House itself, Buckley says the planning application has been submitted. “It’s currently with An Bord Pleanála for a major redevelopment of that whole square actually, together with Apollo House.”

The OPW doesn’t own Apollo House, which was the location for a homelessness sit-in last December and January.

“There’s a sort of a parallel development by the landlord of Apollo House and ourselves,” he says. “It would be a fantastic regeneration for that area of Dublin.”

Buckley was speaking to The Irish Times in the OPW headquarters at Trim, Co Meath, 46km from Dublin. The ultra-modern building is an architectural representation of the legendary Tara Brooch, circular with a cross-piece going through it. The headquarters was opened in 2009 as part of decentralisation at a cost of €40- €45 million.

Another high-profile issue for the agency concerns the Garda premises on Harcourt Square, where the rent is gone up from about €4.9 million to about €6 million annually, with a €500,000 payment of arrears.

Buckley’s colleague, Commissioner of Public Works John Sydenham, comments: “In Harcourt Square you have probably the most sensitive policing units. You’ve got the Emergency Response Units, Criminal Assets Bureau, Crime and Security, the Drugs Squad – all the core operational units operate out of there. So for policing and security it’s of the utmost importance.”

The OPW held the building under lease and its tenure had come to an end. Plans are being developed for a new building on Military Road in Kilmainham. Rather than move out of Harcourt Square in the interim, a new lease of six years has been negotiated which, in Sydenham’s words, will “allow us the time to build the new facility and move out in an orderly fashion”.

Another agency that has moved is the Passport Office, formerly in a leasehold accommodation that was coming to term at 10 Molesworth Street, which has since been demolished. “We did a swap with a developer for an older building we had on Hatch Street,” says Sydenham. “That’s now the new Arthur Cox headquarters. And we moved down to Mount Street for the new Passport Office.”

Adds Buckley: “With Brexit, suddenly since last summer the demand for Irish passports, already quite high, has gone sky-high.” Extra capacity was provided in the north Dublin town of Balbriggan at the cost-efficient rate of €14/sq ft.

Amid the welter of revelations on the internal affairs of the force, it has been reported that farmland associated with the Garda Training College at Templemore, Co Tipperary was leased with a yield of €124,903, which was lodged to the Garda Restaurant account. The land was, in fact, owned by the OPW.

The Garda had alerted the OPW about the situation, Buckley says.

“Their property people have been liaising with our own as to how to put things right. I think that’s in the public domain, he says. “So that will be corrected.”

Meanwhile, the Government has approved a significant increase in Garda numbers over the next five years. This has major implications for the OPW, which supplies premises for the force.

The OPW is expanding its management capacity and recently advertised for a head of planning and estate management with a key role in the organisation’s activities, including the development of a portfolio plan and a vision for the future.

There has been some controversy and concerns over the agency’s massive €140 million scheme to deal with recurrent serious flooding in Cork.

“Like any engineering design, it will impact visually on the banks of the river, no doubt,” Buckley acknowledges. “But it has been done, I personally feel, in an extremely tasteful way.”

Maurice Buckley: Background
Maurice Buckley took over as OPW chairman at the start of the year after 10 years as chief executive of the National Standards Authority of Ireland. Born in Dublin, he grew up in Galway and has spent the past 25 years in Roscommon, where he still lives, commuting to the OPW offices in Trim, Co Meath or at No 52 St Stephen’s Green in Dublin.

Buckley is a graduate in electrical engineering, which he studied at UCD. He also holds a master’s in business administration from the European Institute of Business Administration at Fontainebleau, France. Having worked abroad, he returned to Ireland in 1992 to set up System Label, a specialist hi-tech printing company based in Roscommon, which is associated with German and UK companies.

1 Ireland faces 'deep downturn' this year and may not rebound until 2024 if there is a second wave
2 ‘The rental situation stops me moving back home’
3 John FitzGerald: Civil Service expertise key to Government policy
4 How much do Irish people earn? And what will Covid-19 do to our wages?
5 Why are markets booming when a crash is on the way?
6 Ryanair pilots accept 20% pay cut, airline says
7 Dublin consultancy Pathfinder set for expansion after buyout by Sia Partners
8 Major works at Rosslare Europort after €30m investment from Irish Rail
9 Red tape logjam creates fear for Irish timber supply
10 Why UK supermarkets are not making super profits
Real news has value SUBSCRIBE