€18m Grand Canal office block to be flipped for €23m-plus

Six-storey building has 2,929sq m of office space and parking for 15 cars 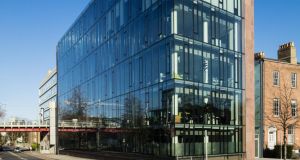 One Grand Parade is on sale for €23m, nearly €5m more than the purchase price in February 2015.

Just over two years after purchasing a relatively new office block overlooking the Grand Canal in Dublin 6, the financial institution Credit Suisse is gearing up to sell it at a significant profit.

Cushman & Wakefield will handle the sale of One Grand Parade which was bought for €18.1 million in February 2015, and is now expected to attract offers over €23 million.

The distinctive six-storey block with 2,929sq m (31,534sq ft) of office space and a basement car park with 15 spaces was first offered for letting just as the property market collapsed in 2008.

The two remaining floors are let to the Oasis Global Management Company and the Kuwaiti Embassy.

The fact that the weighted average unexpired lease term is just over three years and includes an earlier expiry or a break option could provide a purchaser with significant asset management opportunities. Car parking spaces are rented at €3,500 per annum.

The office block has open-plan floor plates with excellent natural light and floor-to-ceiling glazing, with clear views over the Grand Canal.

The building has two 10-person lifts. At basement level there are showers and a bike store.

One Grand Parade is well located in an expanding business district close to the former headquarters of Irish Nationwide, which is now to be redeveloped as an office complex by Hines.

Jonathan Hillyer of Cushman & Wakefield said the micro location of the office block was experiencing significant new development, which would see it become an established part of the Dublin core.

“There are also excellent asset management initiatives in the short term to enable an investor to stabilise the income and drive rents and hence benefit from the rental growth and yield re-rating.”

There has been considerable speculation that Credit Suisse may apply for a full banking licence in Ireland as it prepares to move jobs out of London following the UK’s decision to leave the European Union. The company has already set up a European hub in Dublin to service hedge fund clients.

1 Why gift a son now if it eats into his tax-free inheritance threshold?
2 Coronavirus: Over 1m workers may face tax bills of up to €2,800 at end of the year
3 Troika returns to address unfinished business
4 I tried out deep fake app Doublicat. The results were terrifying
5 Why are markets booming when a crash is on the way?
6 Stocktake: Playing poker with the day traders
7 National accounts record the calm before the storm
8 Buy to let purchase will cost you first-time buyer status
9 EY prepares for backlash over Wirecard scandal
10 Stripe ripe for stock market listing, says US-based analyst
Real news has value SUBSCRIBE