Half of Ronan Group’s €43m, six-acre waterfront site set to include hotel and offices 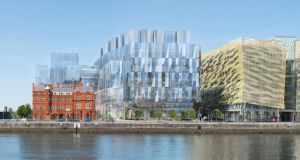 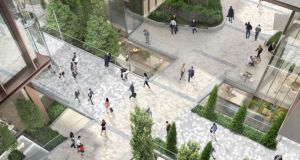 Ronan Group Real Estate (RGRE) has sought a revised planning formula for slightly over half its six-acre waterfront site at Spencer Dock in the north Dublin docklands.

This part of the site, to be known as Spencer Place, has been targeted for a development extending to 66,599sq m (717,000sq ft). The four proposed buildings will include a 212-bed hotel, restaurant/retail units and 46,184sq m (500,000sq ft) of LEED platinum-rated office accommodation.

Prior to Ronan acquiring the site last year for a reported €43 million, the receivers involved had obtained planning permission for a redevelopment that included 31,580sq m (340,000sq ft) of offices and a 169-room hotel.

The company has now opted for a larger and more architecturally striking development. Its notable features will include a seven-storey glazed atrium that will be wider than Grafton Street and three stories of internal gardens to provide high-quality public pedestrian routes through the site.

The former British Rail Hotel, a redbrick protected structure at 58-59 North Wall Quay, is to be refurbished as a 2,688sq m office block with substantial restaurant and bar areas at ground floor and basement levels. New modern offices and a hotel will be built to the rear and side.

The hotel will be set across two separate buildings, with unique glazed pedestrian links on each floor connecting the two buildings. A substantial basement will be constructed beneath to house some 1,000 bike spaces, 168 car parking spaces and a fitness centre of about 929sq m (10,000sq ft)

The proposed office buildings will appeal to a wide range of occupiers given its location at the heart of the docklands. The location looks set to become is one of the best-connected areas of Dublin given its proximity to transport links, including two Luas stations, the Docklands train station, Connolly station and several bus routes.

Planned capital projects, such as a new pedestrian bridge linking Spencer Dock and Sir John Rogerson’s Quay, along with the Dart Underground project,are likely to be of great benefit to the development.

The remainder of RGRE’s six-acre site, which is not subject to the current planning application, has significant space for further development and already has planning in place for 165 apartments, comprising 23 one-bed, 117 two-bed and 25 three-bed apartments.

It is estimated that the overall size of RGRE’s scheme will be about one million square feet, including developments not part of the current application, and will complete the original Spencer Dock masterplan.

These latest plans will be an impressive addition to the area in which Ronan has already developed an estimated two million square feet of space, including the Convention Centre, the offices of professional services firm PwC, and the 620 Spencer Dock Apartments.

Shane Whelan, development director at RGRE, said the recent planning application was the culmination of months of positive engagement with Dublin City Council. The proposed design incorporated the best architectural elements from around Europe, he added.

“I expect that the development will create the new dynamic heartbeat within the evolving development of the docklands area.”