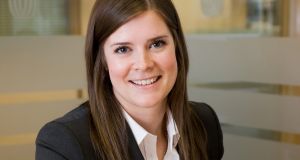 Hannah Dwyer, head of research at JLL: The property index shows continued stability, with a steady return of 2.5 per cent in the first three months of 2017.

Ireland’s commercial property market continues to perform strongly. The JLL Irish Property Index reports that overall returns on its portfolio grew by 2.5 per cent in the first three months of 2017 and by 11.9 per cent over the past year. The combined capital and income return is made up of stable growth in both capital and rental values.

Capital values increased by 1.2 per cent in the last quarter and 6.3 per cent over the year. There was growth across all three sectors in Q1 with industrials at 2.7 per cent recording the strongest increase, followed by retail (2.1 per cent) and offices (0.3 per cent)

On a broader front, overall capital values have increased by 80.5 per cent since the bottom of the market – but still remain 40.7 per cent lower than at the peak in Q3 of 2007.

JLL’s study of a hypothetical portfolio typical of the market generally also found that overall income decreased marginally by 0.1 per cent in the past three months. This was triggered by some temporary rent-free periods for new lettings within the portfolio. In the past 12 months, income increased across the portfolio by 2 per cent.

Also on a positive note, rental values across the entire index portfolio increased by 1.6 per cent in the past three months and were 8.5 per cent higher than 12 months ago. Retail showed the greatest increase (3.7 per cent), followed by industrial (3.1 per cent), with no changes in the office sector.

Hannah Dwyer, head of research at JLL, said the index continued to show stability with a steady income return of 2.5 per cent in the first three months of the year. In the past 12 months, investors had achieved strong overall returns of 11.9 per cent. Capital growth was the main driver of the performance of the index, with an uplift of 1.2 per cent in the quarter and in particular strong growth of 2.7 per cent in values for the industrial sector.

Ms Dwyer said that yields across the entire portfolio remained steady, although there was some minor compression (0.1 per cent) to 4.9 per cent in the past three months. In particular, the initial yield for the industrial sector had compressed from 5.6 to 5.3 per cent due to rental growth and strong fundamentals in the occupier market.

1 MEPs reject Central Bank’s Gerry Cross for key banking role
2 Who are Ireland’s 17 billionaires?
3 Fantasy figures: Why make election promises you can't afford to keep?
4 Are there annual limits on inheritances or gifts to a child?
5 Phil Hogan says EU ready to do ‘ambitious’ UK trade deal
6 Ireland has EU’s most progressive tax system, study finds
7 Cairn Homes gets permission for 426 homes near Greystones
8 Davos: OECD confident on digital tax deal as France takes swipe at Ireland
9 Mobile bank N26 hits 5m customer mark
10 Are you a Monica, Joey or Chandler when it comes to your data privacy?
Real news has value SUBSCRIBE