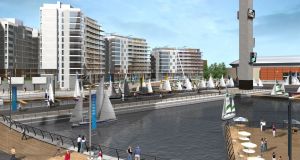 Titanic Quarter: the bustling Belfast area is set to get two new hotels as part of the city’s building boom.

The Hastings Hotels Group is to spend £53 million (€62.2 million) building Northern Ireland’s largest hotel. A total of 304 bedrooms and more than 150 jobs will be involved in the Grand Central Hotel scheme, granted planning permission earlier this month.

It’s just one of 23 hotels in Belfast either under construction or expanding in the city, due to add to more than 3,000 rooms. Four more hotels are at pre-planning stage.

Hotel occupancy in Belfast is running at 80 per cent and currently there are about 3,400 rooms. When all these new hotel developments are completed, it will double the number of hotel rooms in the city.

Many of the developments are being carried out by existing hoteliers. The Bullitt is owned by the Merchant Hotel and though it only opened last October, it is already planning to add 40 bedrooms to the existing 43. Jurys Inn is planning for 80 new rooms and the five-star Fitzwilliam will add 30 new rooms.

The longer-established Wellington Park has been granted permission for 92 extra bedrooms and the Malone Lodge will add 27 more.

The busy Titanic Quarter will get two new hotels, while planning has been granted for a 244-bedroom hotel in Hamilton Dock and work has already begun at Plater’s Yard on a 120-bedroom hotel.

“Belfast is a leisure-led market with higher occupancy at weekends, while room rates are also lower than other UK cities,” said Alex Speers of Commercial Property company CBRE. “There is a demand for business space and an increase in corporates will drive up the business use of hotels, and the rates,” she said.

1 Dracula scenario for Irish economy: second outbreak and no-deal Brexit
2 Ireland faces 'deep downturn' this year and may not rebound until 2024 if there is a second wave
3 Why the Fed thinks Goldman is America’s riskiest bank
4 Why are markets booming when a crash is on the way?
5 ‘The rental situation stops me moving back home’
6 Major works at Rosslare Europort after €30m investment from Irish Rail
7 How much do Irish people earn? And what will Covid-19 do to our wages?
8 Why UK supermarkets are not making super profits
9 Dublin consultancy Pathfinder set for expansion after buyout by Sia Partners
10 John FitzGerald: Civil Service expertise key to Government policy
Real news has value SUBSCRIBE