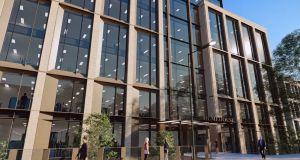 The Hume House office block on Pembroke Road in Dublin 4

Two years ago Irish Life paid €35 million for the existing office block on 0.35 hectares (0.86 acres), which it had presciently sold to developer Sean Dunne 10 years prior for more than €100 million.

Last October it applied for planning permission to develop a new 21,929sq m (236,000sq ft) office complex on the valuable site, and Dublin City Council has now sought further information about one relatively minor aspect prior to issuing its final decision, which is generally a signal that a grant of permission is likely.

The company already has planning permission for a 13,908sq m (150,000sq ft) office scheme that was obtained by the previous site owner, private equity giant Blackstone, but its latest proposal seeks to increase the size of the permitted development by more than 50 per cent with an eight-storey over double-basement structure.

With just two planning objections lodged in respect of the substantial development, the proposal appears to have been well received by neighbours.

The scheme is just one of a number of new developments on the block bounded by Pembroke Road, Lansdowne Road and Shelbourne Road, including the Comer’s mixed-use Number One Ballsbridge adjoining the subject site.

Developer David Daly’s October Management has completed new offices at 140 Pembroke Road next door, while to the east of Hume House Daly is in the process of constructing another office development on the former IPC House site.

There may be a flurry of development activity on the pricey Ballsbridge block, but one development – the proposed redevelopment of Shelbourne House by receivers Grant Thornton – will not be breaking ground any time soon.

An Bord Pleanála refused planning in recent days for the replacement of the existing building with a predominantly office-based development, noting the site is zoned residential under the current city development plan.