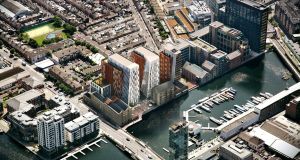 In a year of monster deals, Facebook’s recently announced move to the 14-acre Bankcentre campus opposite the RDS in Ballsbridge has real wow factor: “It is the largest office letting to ever complete in the Dublin market,” says Marie Hunt of CBRE.

When redeveloped by 2022, the site will allow the social media giant to grow its Dublin headcount by 5,000 and quadruple its office footprint in the capital to 80,825sq m (870,000sq ft). The deal will see Facebook move its 2,200 staff from Grand Canal Square (starting in March/April next year). It also means that AIB, which currently occupies the Ballsbridge site, is looking for a new corporate headquarters.

“To put the Facebook deal in context, it is nearly three times the next largest single office take-up on record in Dublin, namely the 300,000sq ft built by Microsoft in South County Business Park last year,” says James Meagher of Knight Frank.

“The scale of the letting shows that foreign direct investment into Ireland remains strong, despite prevailing headwinds such as muted tax rule changes and Brexit. Indeed, the latter could be behind much of the tech expansion in Dublin as companies choose to expand in the stable environment provided by Dublin rather than an uncertain London.”

Google completed a number of large deals during the year, but its most significant transaction was the purchase of the Bolands Quay development alongside its Barrow Street headquarters in the south docklands for about €300 million. This is one of the largest city centre urban renewal projects in years and includes 28,000sq m (301,389sq ft) of office space, 46 apartments, cafes and cultural spaces.

Its standout feature is three landmark towers – one rising to 53m (173ft), another to 49m (161ft) and a third to 47.8m (157ft). The internet search giant is to retain the office element and appoint a letting agent to manage the remaining space.

“The Bolands Quay deal was particularly significant,” says Tanya Duffy of Lisney. “Following this transaction, Google’s combined floor space represented 2.5 per cent of Dublin’s total modern office stock. Large international tech companies like Google are absorbing huge amounts of office space. Since 2014, the sector has typically accounted for between 30 and 45 per cent of all activity across Dublin, which compares with 10 per cent in 2006/2007.”

Meagher points out that Google’s office acquisition spree now means it has “strategic control” of much of the south docks.

“This illustrates their long-term commitment to the city and, more importantly, gives them huge room for expansion. Which means a lot of highly paid jobs will be available. Together with the Facebook deal, 2018 will be remembered as the year that Dublin truly came of age as a tech hub of global importance.”

Another eye-catching deal was the purchase, for €101 million, of the 17,652sq m (190,000sq ft) Beckett Building on East Wall Road in Dublin 3 by South Korea-based Kookman Bank. It had previously sold for about €5 million in 2013 when acquired by the Comer Group after it was offered for sale by receivers acting for Bank of Scotland (Ireland).

The scheme had been developed by Liam Carroll of Zoe Developments shortly before the market collapsed in 2007. The Comer Group spent about €30 million on a high-spec fit out before securing Facebook on a 15-year lease at €4.53 million a year.

Another key aspect of the Beckett Building deal is that Dublin is now considered mainstream by global real estate capital markets. Some commentators point to Asian investors in particular showing a strong interest in Dublin.

“Where large-scale, high-quality core office assets are offered, there is strong international investor interest,” says Hunt. “And recent transactions clearly demonstrate that Asian investors will look at Ireland if the opportunity is good enough.”

This year also witnessed the ongoing growth of serviced office space and specialist providers to this expanding segment. “About 12 per cent of office take-up in Dublin in the first nine months of 2018 was accounted for by flexible occupiers which proves this trend is here to stay,” says Hunt.

The most significant deal in this sector was WeWork agreeing to lease about 9,245sq m (99,513sq ft) of office space at No 2 Dublin Landings, close to the new Central Bank building on North Wall Quay in the fast-developing north docklands. The overall Dublin Landings project, which will extend to more than 100,000sq m (1,076,380sq ft), is being developed by Irish property company Ballymore and its Singapore partner Oxley.

In further evidence of Asian interest in the Dublin market, a South Korean real estate investment trust has just bought No 2 Dublin Landings for €106.5 million, reflecting a net initial yield of 4.21 per cent. WeWork is paying an initial annual rent of €4.87 million with a fixed uplift to €5.38 million in year five. The Central Bank recently bought blocks four and five (with a combined 18,850sq m/200,000sq ft) at Dublin Landings for about €210 million.

The most significant development site to sell this year was probably the 4.6-acre Project Waterfront in the north Dublin docklands for more than €180 million. It was bought by a joint venture formed by developer Johnny Ronan and US investment group Colony Capital.

It is the last sizeable waterfront site in this part of the city and has planning permission for four office buildings, with a combined 27,890sq m (300,216sq ft) of space, and 420 apartments. However, given revised planning guidelines, it will be no surprise if permission is sought for a larger scheme.

Either way, any finished development will be well-positioned to benefit from the huge weight of equity seeking a home in Dublin’s private rented sector.

Kennedy Wilson’s purchase of a 4-acre site at the Grange on the Stillorgan Road – part of a €160 million deal that also included 274 apartments – marked one of the last major disposals by Nama of its residential stock. As a result, says Meagher, “we believe that the next stage of the cycle will see investors increasingly turn to forward fund large-scale residential developments on a build-to-rent basis. There is up to €5 billion of capital chasing opportunities in this sector in Dublin.

“The ongoing Diageo partnership negotiations for a 12.6-acre site at St James’s Gate is one to watch. With the building-out of the docklands nearly complete, developers and investors are looking towards the next growth area of the city. St James’s Gate will offer a site of scale that has the potential to be a catalyst for the transformation of this Dublin 8 city quarter.”

Meanwhile, the 0.72-acre site of the former Apollo House on Tara Street was recently reported to have made more than €40 million in a sale to Marlet Property Group, which already has planning permission for an office scheme at the adjoining former offices of An Post and Screen Cinema.

In terms of retail, Hunt points to the redevelopment and extension of the Frascati Shopping Centre in Blackrock as a “great example of repositioning older retail stock to meet changing consumer needs as the sector faces structural pressures”.

Duffy points to the letting of 72 Grafton Street to UK brand The White Company as “reflective of the retail market at present”. Marketing of the property began in 2016 and refurbishment works were undertaken, but a lease was not signed until March 2018. “There are retail tenants in the marketplace but they are very selective when it comes to property and want the right property to suit their brand,” she says.

A significant transaction in the industrial sector was the sale, for about €51 million, of the 195-acre former Hewlett-Packard campus in Leixlip, Co Kildare, to BlackRock Real Estate Assets and developer Michael O’Flynn.

“This was a very important deal for the market,” says Hunt, “as it offers the chance to develop scale.”

The letting of Unit 665 at Greenogue Business Park in Rathcoole was notable, according to Duffy, for its size (at 10,000sq m/107,639sq ft) and because it was spec-built. “It emphasises the strength of demand for large industrial facilities.”