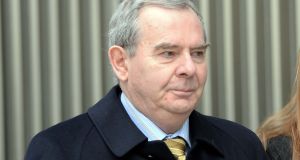 On Tuesday, June 21st, 2011, €65,750 went from the account of the then infant daughter of Ciara Quinn and Niall McPartland to a company in Dubai called Mecon.

The money was the equivalent of $90,000 and the following day that sum was used to buy newly issued shares in a property company in India called Mack Soft. The net result was that Mecon got control of an 800,000sq ft multitenant office building in Hyderabad, India, called Q City, that may be worth as much as €65 million.

Since that €65,750 was used to get control of the building, tenants have paid approximately $36 million in rent. The whereabouts of a large part of this income is currently unclear.

Q City is part of the international property portfolio formerly owned by the family of the businessman Seán Quinn, father of Ciara Quinn.

The State-owned Irish Bank Resolution Corporation (IBRC), now in liquidation, has been trying to assert control over the portfolio since 2011, and is alleging a conspiracy on the part of the family to try put as much of the property as possible beyond the IBRC’s reach.

An enormously expensive, multiyear, multijurisdiction battle has seen the IBRC eventually assert control over property in Russia, Ukraine and elsewhere. While the battle over those properties was ongoing, millions of euro in rental income disappeared. Major properties in Moscow and Kiev, that could have been sold, lost much of their value following the Russian incursions into Ukraine.

Efforts to assert ownership over some of the smaller properties in Russia have been abandoned, as the expense involved could not be justified.

Meanwhile, the effort by the IBRC to assert its legal rights continues eastwards. India is the final frontier.

Since the transfer from the infant girl’s account to the company in Dubai, bogus software contracts and other methods have been used to extract $15 million in cash from Mack Soft, according to a judgment of the High Court last month.

In October 2017, IBRC secured an order in Hong Kong against Orient that yielded important new information, as did proceedings it is involved with in Hyderabad involving Mack Soft.

The information secured disclosed that Mecon, under the controlling directorship of Dutch lawyer Willem Smit, caused Mack Soft to enter into bogus transactions, the sole purpose of which was to extract “many millions of dollars” from Mack Soft, according to the ruling by Mr Justice Robert Haughton.

Smit is a partner in Senat Legal Consultancy, which is based in Dubai and also has offices in Liechtenstein. Senat is an adviser to the Quinn family, according to Mr Justice Haughton.

When Isaad was being incorporated in October 2011, an email address provided was mw@senat.ae, an address used by Michael Waechter, another partner in Senat.

As noted by Mr Justice Haughton, on June 20th, 2011, the day before the money left the McPartland child’s account, Peter Darragh Quinn, a nephew of Seán Quinn snr, met Waechter in Dubai. The next day Waechter bought the then shelf company Orient, in Hong Kong.

The new shares in Mack Soft that were bought by Mecon so that it could assert control over Mack Soft were issued after a Mack Soft extraordinary general meeting had been organised by Niall McPartland and Stephen Kelly, the latter being another son-in-law of Seán Quinn snr.

Mr Justice Haughton said that Mecon and Senat were central to the scheme to “extract cash and asset strip Mack Soft and put these assets beyond the reach of the” State-owned IBRC.

The evidence, he said, clearly demonstrated that Mecon and Senat are linked to the Quinns and that the Quinns have “some mechanism that enables them to benefit from Mecon’s activities. What that is, is at this stage unclear.”

The extraordinary fact is that all of this occurred against a background where the Irish courts had issued orders prohibiting the asset stripping of the property portfolio formerly owned by Seán Quinn’s family.

On June 27th, 2011, an interim order was made by the then Mr Justice Frank Clarke against the Quinn family and their agents. A full order was made the following month.

In July 2012, another order was made by Mr Justice Peter Kelly, which included mention of Mecon and Q City.

In his ruling Mr Justice Kelly said the uncontroverted evidence before him was that the Quinn family had created a scheme of “mesmeric complexity” which cynically sought to put assets beyond the reach of the IBRC and to “feather the Quinns’ own nests”. The scheme “reeks of dishonesty and sharp practice”, he said.

Although the language used by Mr Justice Haughton in his judgment in February was not as strong, he was equally clear as to what he believed was going on, six years after Mr Justice Clarke’s original intervention.

In his affidavit to the court in February, Smit said Orient was a company requested by a Senat client but did not say who that client was.

“I am satisfied, having considered all of the evidence before the court, that the probability, indeed almost the certainty is that the client was the Quinn family,” Mr Justice Haughton said.

The judge noted that, in September 2011, Smit received copies of the orders made by the Irish High Court some months earlier by Mr Justice Clarke.

“I find that Mr Smit and Mecon from then on knew all about those orders and consciously helped [the Quinn family] and were party to an elaborate scheme to asset strip Mack Soft . . . and that Mr Smit and Mecon well knew that this would have the effect of indirectly transferring assets out of Quinn companies named in the orders and contrary to those orders,” Mr Justice Haughton said.

“That they did this for reward is also evident” from the affidavits submitted by IBRC, he said.

His judgment is just one in a series of interlocutory judgments in a case, called the conspiracy case, which began in 2011 and the conclusion of which is likely to be some years away.

Given that the case has involved multiple hearings in Ireland, Belize, Russia, Ukraine, Hong Kong, India and Turkey, as well as elsewhere, the legal fees are no doubt eye-watering. Indirectly, the cost comes from the public purse.

Earlier this week, as part of the ongoing battle between the Quinn family and the IBRC, Seán Quinn jnr and his wife, Karen Woods, were up before Mr Justice Haughton seeking the release of €10,500 so they could pay off arrears in living expenses that they have accumulated.

The couple, along with other members of the family, have had their accounts frozen since 2012 as part of the ongoing conspiracy proceedings. They receive an annual allowance of €100,000 as living expenses from accounts controlled by receivers appointed over their assets. The couple, the judge observed, will not be destitute. Meanwhile, the battle to assert control over Q City and its income continues both here and in Hyderabad.

Estimated value of the Quinn International Property Group in 2011, when a share receiver was appointed over the Swedish company that headed the group: €500 million.

Amount the Irish Bank Resolution Corporation, in liquidation, claims it is owed by the Quinn family (which disputes the claim): €2.3 billion.

Estimated loss in value of property in Russia and Ukraine because of Russia’s attacks on Ukraine in 2014 and the resulting sanctions against Russia: €80 million.

How much rent went missing during the two years it took for the IBRC to gain control of the income arising from the Kutuzoff Tower in Moscow (2011 and 2012): Approximately €23 million.

How much cash has gone missing from property company Mack Soft that owns an office block in India: $15 million.

Cost of IBRC’s attempt since 2011 to assert control over the property portfolio that has involved legal proceedings in Ireland, Northern Ireland, Russia, Ukraine, India, Hong Kong, Belize, the British Virgin Islands, and elsewhere, and is still ongoing: We don’t know. A lot.

Whose paying for the international effort to frustrate the State-owned IBRC asserting its rights and how much has it cost: We don’t know, and many millions of euro.