Shares in Hammerson jump on takeover approach from Klepierre 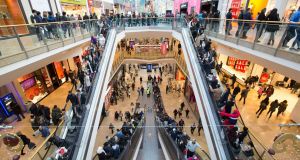 Klepierre, a French property giant, said its move was snubbed by Hammerson in less than 24 hours. Photograph: Jon Super/PA Wire

The French company said it offered 615 pence per share, a premium of about 40.7 per cent to Hammerson’s closing price on March 16th. Hammerson shares then traded 26.5 per cent higher at 553 pence.

Klepierre said the proposal was made on March 8th and that it was rejected by the Hammerson board in less than 24 hours.

Shares in Hammerson, which owns Birmingham’s Bullring shopping centre, had fallen 20 per cent year to date before the offer as investors worried that the deal watered down its higher quality portfolio and raises its exposure to a difficult UK retail market.

A successful bid for Hammerson from Klepierre would make the Intu Properties deal less likely to go through.

“The share price move is indicating that there is a chance that some of the shareholders are very interested in that Klepierre potential merger,” said Peel Hunt analyst James Carswell.

Shares in Klepierre were down 3.2 per cent.

The statement from Klepierre came after it was reported on Monday that Klepierre had made a £5 billion takeover approach for Hammerson.

When contacted by Reuters Hammerson did not immediately offer any comment but said they would make an announcement shortly.