Accenture to set up fourth employment centre in Cherrywood 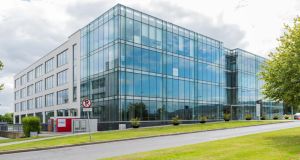 Accenture is on the expansion trail, and will lease the first floor of Building 11 in Cherrywood

Global consultancy and technology giant Accenture is again on the expansion trail in Dublin, with plans for a fourth employment centre in the proposed new town centre in Cherrywood in south Dublin.

The firm is believed to have agreed a rent of about €269 per sq m (€25 per sq ft) for 2,787sq m (30,000sq ft) on the first floor of Building 11, owned by DLR Properties, a subsidiary of Dún Laoghaire-Rathdown County Council. A new long-term lease includes break options and provision for car parking spaces at €1,500 per annum.

Accenture has been in Ireland for almost 50 years and has a staff here of more than 2,500. Its main business is located at 1 Grand Canal Square in the Dublin docklands. It also has a multidisciplinary research and incubation hub at 7 Hanover Quay and a corporate services hub at Grand Canal Plaza.

It will have a similar capacity as Building 11, along with 28 car parking spaces. That block will be the first new development in the office park since 2010.

Conor Whelan of letting agent QRE said the Scott Tallon Walker-designed Building 12 could be delivered within 21 months at a rent of €323 per sq m (€30 per sq ft) and €1,750 for car parking spaces.

The arrival of the firm will be seen as an important endorsement for the 400-acre Cherrywood project.

It follows a recent announcement that the US-based Hines group has entered into a €450 million joint venture with Dutch pension investor APG Asset Management to develop and retain the sites and the construction of 1,221 fully serviced “build-to-rent” apartments, along with street-level shops and cafes in the new town centre.

Mr Whelan said that with office rents in Dublin city rising significantly in 2017, there had been a notable shift in demand to the suburbs, and particularly the south suburbs, where occupancy costs were generally half those in the city centre.

The south Dublin suburban sector had performed strongly over the past 12 months, with rents increasing by 15 per cent, he added.

“We expect further rental growth over the next three years as the supply of older stock diminishes, new developments come on stream and demand continues to rise.”

A site at One South County is the only one currently under development, but Mr Whelan said he expected other office projects to get under way in the next 12 months, and to be available to rent at €323 to €376 per sq m (€30-€35 per sq ft).