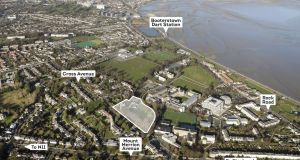 An aerial view of the Cross Avenue site. The property is immediately adjacent to Blackrock College.

Lioncor, a joint venture between Alanis Capital and US private equity giant Oaktree, is said by market sources to have secured ownership of the site on Cross Avenue in the face of competition from a number of parties involved in the development of high-end homes to the owner-occupier and private rented sector.

While the lands were put up for sale in May 2019 by agent Avison Young (formerly GVA Donal O’Buachalla) at a guide price of €20 million, it is understood the transaction was only completed in recent weeks. The proceeds of the property’s sale will go to the order responsible for Blackrock College, the Holy Ghost or Spiritan congregation.

Members of the Spiritan Blackrock community, who live in a residence on the site, will move to other Spiritan residences, while the funds raised from the sale are to be used to support the charitable work of the order, and to reduce debt within the province.

Outside of their involvement with Blackrock College, the Spiritans are also responsible for St Michael’s College on Merrion Road and Rockwell College in Tipperary. The order also founded St Mary’s College in Rathmines and Templeogue College in Dublin.

Cross Avenue falls within an area zoned “objective A” in the Dún Laoghaire Rathdown Development Plan 2016-2022. The objective for this particular zoning is to “to protect and or improve residential amenity” and, guided by the objectives of the plan and current town planning policy, MOLA Architecture prepared a site capacity/feasibility study in advance of the site’s sale indicating its potential for a high-end residential development scheme. The site feasibility study examined the potential for two development options for the site – 121 units in build-to-sell (BTS) and 154 units in build-to-rent (BTR) layouts.

Quite apart from its location immediately next to Blackrock College and Dominican College Sion Hill, the site is within close proximity to a range of other primary and secondary schools, including Willow Park School, Carysfort National School, and St Andrew’s College. In terms of third-level institutions, both UCD and the UCD Michael Smurfit Graduate Business School are located within a 10-minute drive in either direction. Blackrock Clinic is also close to the subject property.

Outside of Dublin, Lioncor is developing the Leana Theas estate in Knocknacarra, Galway, Castlebrook Manor in Castletroy, Limerick, Sallybrook in Co Cork and a scheme in Bray, Co Wicklow.

The developer’s name has also been linked in recent reports with the potential delivery of the housing on the former Irish Glass Bottle lands in Ringsend, Dublin 4.

Developer Johnny Ronan’s Ronan Group Real Estate (RGRE) is currently in the process of completing the €160 million purchase from Nama of an 80 per cent interest in the site in partnership with Lioncor’s joint owners, Oaktree.