Irish market proves lucrative for California-headquartered investor as average rent hits $2,493 compared with $1,591 in US 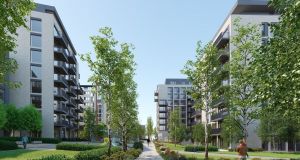 A computer-generated image of the apartments at the Grange in Stillorgan, Co Dublin

Kennedy Wilson is to begin building hundreds of rental apartments in Stillorgan in south Dublin and in the city’s south docklands.

The commencement of works at the Grange and Coopers Cross schemes follows the recent appointment of main contractors for the projects.

In the case of the Grange, John Paul Construction has been selected to direct the delivery of 287 units across six blocks ranging in height from one to 11 storeys. The expected completion of the apartments in the first half of 2023 will bring Kennedy Wilson’s overall holding at the Stillorgan scheme to 561 units. The real estate firm, which has its headquarters in the US, acquired its current holding of 274 of the Grange’s existing 507 units along with the four-acre site it is now building on for €160 million in June 2018.

In Dublin’s south docklands, Kennedy Wilson has appointed John Sisk & Son to build 472 apartments as part of its wider Coopers Cross development. The 5.9-acre site to the rear of the Central Bank’s North Wall Quay headquarters will, upon completion, comprise a mixed-use campus with 395,000sq ft of grade A office space and amenities including a new public park. Kennedy Wilson and its joint venture partners, Axa Investment Managers – Real Assets and Cain International, acquired the lands for €113 million in 2018.

Kennedy Wilson’s investment to date in Ireland’s private rented sector has proven to be relatively lucrative compared with its larger and longer-established home market of the United States.

An examination of a recent supplemental financial statement released by the company and covering the three-month period to the end of last September shows the average monthly rent for its apartments in Ireland came in at $2,493, compared to an average of $1,591 across its units in the US.

Kennedy Wilson currently owns and operates over 2,500 units in the Irish market. That figure is set to grow to about 3,300 units by the end of 2023, including sites under development.

Peter Collins, president of Kennedy Wilson Europe, said: “Since our first investment in this sector over eight years ago, we have seen professionally managed rental accommodations play an increasingly important role in addressing the shortage of housing, particularly apartments, in Ireland. We expect these new units will be very well received when delivered in 2023. We are confident that Ireland, the only English-speaking EU country, will make a strong recovery as an attractive HQ destination for global companies, underpinned by a young and growing population, strong talent pool and university system.”