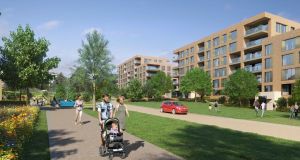 Cairn Homes is understood to have been in talks with US-headquartered property giant Greystar for the sale of 385 homes it is developing on a site at Griffith Avenue in Marino, Dublin 3.

While the terms of a deal have not been agreed between the parties, The Irish Times understands that Greystar has made an unsolicited offer of about €180 million for the Griffith Wood portfolio.

The €180 million price tag equates to an average of €467,532 per unit, which is broadly in line with the €457,413 per unit that German investor DWS paid in July as part of its €145 million acquisition of a portfolio of 317 residential units the MKN Property Group is developing in Dublin.

The Deutsche Bank subsidiary’s purchase of the Prestige portfolio gives it control of a mix of existing and new-build apartments and houses distributed across four schemes in the north Dublin suburbs of Swords, Raheny, Clontarf and Killester.

Cairn Home’s Griffith Wood development has a prime location on a three-hectare (7.41 acre) site on Griffith Avenue that had been owned previously by the Christian Brothers.

The scheme, which is currently under construction, is set to comprise 377 apartments and eight houses. The apartments will be distributed across seven blocks ranging in height from four to eight storeys, and will be complemented by the provision of 367 car parking spaces, 682 bicycle parking spaces, as well as a creche and a gym for residents.

Cairn secured planning permission for the development under the terms of the Government’s Strategic Housing Development (SHD) scheme in April 2019. The “fast-track” planning scheme as it is more commonly known, allows developers seeking permission for large-scale residential schemes of 100 housing units or more to bypass local authorities and apply directly to An Bord Pleanála.

Cairn Homes’ sale of the Griffith Wood portfolio is in keeping with its twin-track strategy of delivering new homes to the traditional owner-occupier market and to the private rented sector (PRS) market.

The news of Cairn’s talks with Greystar follows on from its €78.75 million forward sale last January of 229 residential units in Lucan to a special purpose company managed by Carysfort Capital, and funded by US investment firm, Angelo Gordon. Carysfort Capital and Angelo Gordon previously acquired Cairn Homes’ 120-unit apartment development at Six Hanover Quay in Dublin’s south docklands for €101 million in 2019.

Should Greystar manage to secure ownership of the Griffith Wood scheme, the deal would represent its second transaction in Ireland’s rapidly expanding PRS market.

The South Carolina-headquartered company made its first investment here in July of last year, paying €175.5 million for 268 high-end apartments at Dublin Landings, the million square foot mixed-use development Ballymore delivered over recent year in partnership with Oxley in the Dublin docklands.