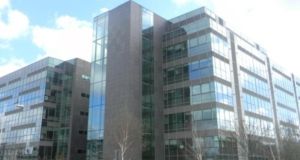 Q House in the Sandyford Industrial Estate: An office suite is for sale for €1.195m

US software company MongoDB is to relocate much of its overseas operation to Shelbourne Buildings in Ballsbridge, Dublin 4. The firm will occupy the entire third floor of No 3, extending to 830sq m (8,936sq ft) at a rent reported to be “in the region” of €50/sq ft. The new 10-year lease includes a break option in year seven.

Keith O’Neill of BNP Paribas Real Estate is handling the letting of the office space, which is being refurbished by landlords IPUT. The upgrading will include the provision of a new reception area and the modernisation of the lifts and other common areas.

BNP Paribas Real Estate is guiding €7.25 million for a site at Brown Street, Dublin 8, with planning permission for a development to include 281 student bedrooms and a science and technology facility extending to 799sq m (8,600sq ft).

The 0.82 of an acre site off Cork Street with frontages on to Brown Street and Brickfield Lane is within walking distances of Trinity College, RCSIU and DIT, according to selling agent Mark Forrest. He says the proposed development, known as The Quarters, will appeal to existing and new companies because of the efficient design involved, the quantum of bed spaces, location and planning permission.

A site with potential for an infill housing development in the south Dublin village of Foxrock goes on the market today through the Savills agency at a guide price of €1.75 million. The site extends to 0.219 of a hectare (0.54 of an acre) and is located off Brighton Road, about 500m south of Foxrock village.

A four-bedroom house, Coolhaven, now stands on the site. According to selling agent Jill Horan, there is potential to provide up to 18 apartments in three blocks or two high-end detached houses.

O’Mahony Auctioneers is quoting €1.195 million for a an office suite in Q House at Sandyford Industrial Estate in south Dublin. The facility extends to 348sq m (3,742sq ft) on the fourth floor of the building and is likely to be of interest to both owner-occupiers and investors. The sale includes seven parking spaces. The reception is open 24 hours a day.

Cushman & Wakefield is seeking in excess of €2.7 million for the former Banta industrial facility at Raheen Business Park in Limerick. The building offers 1,433sq m (15,427sq ft) of offices alongside a further 7,896sq m (85,000sq ft) of manufacturing and warehouse facilities.

John Buckley of the selling agents said Raheen park had witnessed significant investment in recent years, with companies such as Regeneron upgrading the former Dell building into a world-class production facility.

1 Moving in and out of lockdown is a recipe for economic disaster
2 Ivana Bacik opposes Bartra’s Ballsbridge shared co-living plan
3 UK criticised for ‘unforced errors’ on post-Brexit trade deals
4 Aryzta’s move to replace chairman prompts takeover speculation
5 Brown Thomas and Arnotts to cut 15% of jobs due to coronavirus crisis
6 Stripe lures Dhivya Suryadevara from General Motors to be CFO
7 US treasury forced to pay up to fund record stimulus
8 What will the office market look like after the great remote working experiment?
9 How Tony Buzan used mind maps to doodle his way to millions
10 ‘There’s something quite exotic for me still about Asia’
Real news has value SUBSCRIBE