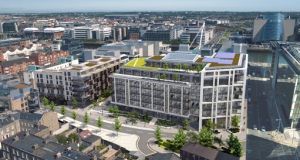 The Sorting Office development is located on the corner of Cardiff Lane and Hanover Street East, opposite the Bord Gáis Energy Theatre.

Google has pulled out of plans to rent additional office space for up to 2,000 people in Dublin, reflecting uncertainty over the future of traditional working environments.

The company was close to taking 202,000 sq ft (18,766sq m) of space at the Sorting Office building close the quays to add to its stable of properties in the capital where it employs over 8,000 people.

It emerged on Monday evening that the move would not proceed. One source familiar with the plan indicated it was simply not a good time for companies to invest in commercial office space “while they are looking at what the future of work looks like”.

Google is currently operating a global work-from-home option for staff until next June, although its Dublin offices remain vacated in line with Government health guidelines.

The Sorting Office u-turn is being perceived as a reflection of the Covid era rather than any indication of the company’s expansion plans.

In a statement on Tuesday, Google confirmed that “after much deliberation, Google has decided not to proceed with leasing the Sorting Office.

“We are grateful to Mapletree for all their work with us, and wish them well in the successful letting of this excellent office building. We are committed to Ireland and continue to invest in our Irish operations.” It did not offer an explanation for the reversal.

Google currently has offices around the so-called Silicon Docks area, and its European headquarters is located on Barrow Street and at the nearby Montevetro building.

Last February, just before the onset of the pandemic, it finalised a €120 million purchase of the Treasury Building on Dublin’s Grand Canal Street. The acquisition followed more than two years of negotiations.

The company has offices in Block L at Freeman House in EastPoint Business Park, and at the Chase and Blackthorn buildings at Sandyford in south Dublin.

“There’s [still] a lot of Google to go around,” said one source in reaction to Tuesday’s development.

The decision will be keenly observed by many companies weighing up how best to plan for the future.

Google, Amazon, LinkedIn, Facebook and Salesforce have been in the process of establishing five individual campuses covering a total area of 3.6 million square feet between the north and south docklands, at the Baggot Street and Charlemont sections of the Grand Canal, and in Ballsbridge.

Once finished, this level of office space stands to accommodate around 36,000 workers, not including the thousands of additional personnel Google, Facebook and Salesforce have recruited to work in their offices in the Sandyford Business District (SBD) in south Dublin.

1 Chris Johns: Boohoo exposed on pay and conditions in digital economy
2 In this strangest of recessions, what happens next for Ireland?
3 Fortnite owner signs multimillion deal to buy Irish ‘kidtech’ firm
4 Qatar Airways got €1.7bn government lifeline after losses widened
5 Michael O’Leary is the boss you want to lead an airline out of crisis
6 Should I switch bank now with Ulster Bank at risk of closing?
7 Bank of Ireland sees about 2,000 staff apply for voluntary redundancy
8 Ireland’s Covid-19 economy in five graphs
9 FBD changes wording of business insurance policies amid fight over virus payouts
10 Hotel bookings collapse in wake of additional Covid restrictions
Real news has value SUBSCRIBE