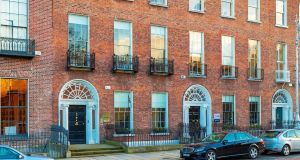 Investors looking to secure a foothold at the heart of Dublin’s traditional central business district may be interested in the opportunity presented by the sale of two adjoining Georgian offices at 46 and 47 Merrion Square and their associated mews buildings at Stephen’s Place.

Extending to a total area of 1,555sq m (16,745sq ft), the investment is being offered to the market in one or more lots by agent Colliers International at a guide price of €10.5 million.

Colliers is offering the buildings for sale by way of separate lots.

Number 46 is occupied by three tenants – the Association of Consulting Engineers of Ireland, Two Ten Health and the Institute for Study Abroad – and is generating combined rental income of €203,220 per annum. The Two Ten Health lease contains annual fixed uplifts, with the next uplift occurring on October 1st 2020. This will increase the passing rent for the entire of 46 Merrion Square to €215,220 per annum.

An incoming purchaser will also have the opportunity to substantially increase the rent roll through letting the vacant mews at 46 Stephen’s Place. The estimated market rent for this property is about €85,000 per annum.

Colliers are guiding a price of €4.8 million for 46 Merrion Square and 46 Stephen’s Place, equating to a net initial yield of 3.85 per cent.

The entire meanwhile is available for sale at a guide price of €10.5 million, equating to a net initial yield of 4.46 per cent.

Michele McGarry, director of investments at Colliers International, says: “The sale of two adjoining, Georgian buildings of exceptional quality together with the mews buildings and parking, is something of a rarity and it presents buyers with a superb opportunity.

“The long unexpired term on number 47 Merrion Square and 47 Stephens Place and the potential to immediately let the vacant mews in 46 Stephen’s Place will be particularly attractive to investors.”