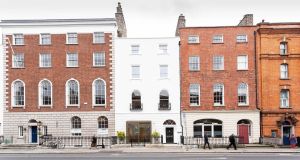 The Bondwell at 35 Westland Row comprises offices and a rooftop landscaped garden to the rear.

Boutique property developer Trinity Real Estates is understood to have secured in excess of €4 million from the off-market sale of a restored period property in Dublin city centre to a private investor.

Located at 35 Westland Row, The Bondwell, as it is now known, comprises a renovated four-storey Georgian office building. Originally built in 1773, the property has been home to a succession of famous commercial tenants, from the Dublin franchise of London’s Oporto wine company in 1826 to the pioneering Dublin and Kingstown Railway Company, which occupied the building from 1837 right up until the early 20th century.

The Bondwell occupies a high-profile position on Westland Row, and is situated just 150m from Merrion Square and within a 10-minute walk of both St Stephen’s Green and the city’s thriving docklands. The immediate area is home to a number of major employers, including Google, Stripe, Twitter, Facebook, 3M and KBC Bank.

The property is served by extensive public transport links, including the adjacent Pearse Street Dart station and the nearby Luas green line stop at Dawson Street. The area is also served by numerous Dublin Bus routes and Dublinbikes.

While Mr Byrne declined to comment on the selling price, he said it “reflected a combination of the quality of refurbishment works, the quirky design and layout, tenant amenities, the condition of the property and the strong level of enquiries”.

Liz O’Mahony of Knight Frank said: “We were delighted to work with our client sourcing a bespoke office building for their unique requirement and have secured a high-quality property which mixes period features with contemporary design in the heart of the city centre.”