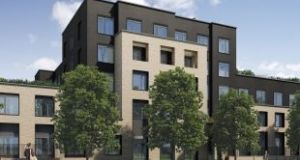 Bartra Capital is to spend €130 million constructing the four co-living sites it has planned for Dublin.

The Richard Barrett-led property group confirmed the planned spend on Thursday as it relodged plans for a €40 million, 210 bed-space co-living project in Castleknock with An Bord Pleanála.

All four projects – at Dún Laoghaire, Rathmines, Castleknock and Ballsbridge – have faced strong opposition in the planning process, with the co-living model coming under fire from politicians and locals due to the size of the living spaces available to residents and the scale of the buildings.

However, the model has found favour with An Bord Pleanála, which has so far granted planning permission to Bartra for three separate co-living planning applications.

Already, site works have commenced at Bartra’s co-living project at Eblana Avenue in Dún Laoghaire, which will be completed late next year.

The company expects site works to begin on its Rathmines co-living proposal in the first quarter of next year.

Bartra’s’s plan for a 111-bed space co-living project for Merrion Road in Ballsbridge is facing local opposition due to in part to Covid-19 concerns expressed by Aryzta chief executive Kevin Toland and his wife, Aisling Toland, Labour Senator Ivana Bacik and others.

Bartra has pointed to the report of an independent medical expert, Dr Martin Hogan, who examined the Merrion Road plan for Bartra and determined that the risks of Covid-19 transmission would be lower for residents of the Bartra proposal than for people living in a normal house or shared apartment.

A spokeswoman for the company said on Thursday that the planned construction of the four shared co-living spaces at Rathmines, Dún Laoghaire, Merrion Road and Castleknock will create 400 construction jobs and 60 full-time operational roles.

Asked if Bartra had plans for other shared co-living plans, the Bartra spokeswoman added: “We may in the future look or examine the possibility of a small and select number of further opportunities in locations relevant to internationally mobile single people and healthcare workers in the Dublin area.”

The fresh Castleknock proposal, which would involve the demolition of Brady’s pub on the Old Navan Road, comes after a local residents’ group challenged earlier approval last year.

Dr Hogan said in relation to the new Castleknock plan that the risk of transmission of Covid-19 among residents was “very low provided social distancing is observed and cleaning in the common areas is performed diligently”.

Dr Hogan has lodged a Covid-19 risk assessment on behalf of Bartra with the application, in which he states: “I believe the risk [of transmission] even in the kitchens is negligible.”