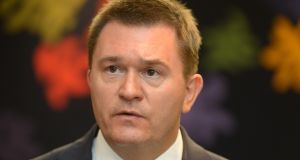 Glenveagh Properties co-founder and former chief executive Justin Bickle has lured one of the key figures he brought into the housebuilding company before its 2017 stock market flotation to join him in his latest venture.

Shane Scully, who was chief development officer at Glenveagh Living, a unit focused on designing and building apartment blocks for institutions in the buy-to-rent sector as well as Government entities, has become the managing partner for Ireland for Mr Bickle’s Postbridge Capital.

Postbridge was established by Mr Bickle earlier this year in London to co-invest with large institutional investors in commercial property and “special situations”, help companies raise capital, and advise on corporate restructurings, according to its website. So-called special situations typically refer to investments in projects or companies that are in distress or where there is a large perceived gap between their market and underlying value.

Postbridge set up an Irish subsidiary earlier this month, naming Mr Scully as a director, according to Companies Registration Office filings.

Mr Scully, a chartered surveyor, was previously a director of Bennett Property, part of the Irish family-owned Bennett Group construction services company. While there, he worked closely in the wake of the property crash with Mr Bickle, then an executive with US private equity giant Oaktree’s European operation, on a number of property projects. Nama was also involved in a number of the developments.

Oaktree, meanwhile, rolled much of its Irish residential development land bank into Glenveagh.

Mr Bickle resigned from Glenveagh in August last year to return to the UK, having spent much of the past decade living or working in Dublin. He was succeeded as chief executive by Stephen Garvey, another co-founder of the business, who was previously its chief operating officer.

Mr Bickle remains a beneficiary of the founders’ share bonus scheme built into Glenveagh’s flotation that entitles him, Mr Garvey and executive chairman John Mulcahy to a portion of shareholder returns over five years.

Mr Bickle received almost €10 million of ordinary Glenveagh shares from an initial conversion of founder stock in 2018. The company has not yet met the requisite stock performance target to trigger further conversions.