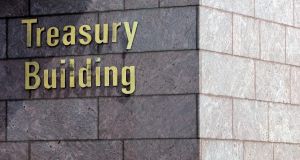 “There continues to be significant uncertainty to the extent of the impact that the Covid-19 pandemic will have on the markets that Nama operates in.” Photograph: Eric Luke

Ongoing Covid-19 uncertainty left the National Asset Management Agency (Nama) with a €9 million loss at the end of June, according to figures published on Friday.

A State agency report for the three months ended June 30th shows that it generated €326 million in cash in the first half of the year, which included €226 million in the quarter ended March 31st.

Nama reported a loss of €9 million for the first six months of the year. Losses of €49 million over the three months to the end of March cancelled out a €40 million profit that the agency earned in the second quarter.

The agency blamed the losses on coronavirus. “There continues to be significant uncertainty to the extent of the impact that the Covid-19 pandemic will have on the markets that Nama operates in,” it tells Minister for Finance Paschal Donohoe in a letter accompanying the accounts.

“However, Nama continues to make every effort to mitigate the financial and other impacts using measures under our control,” add chairman Aidan Williams and chief executive Brendan McDonagh in the letter.

Nama generated a further €100 million from the end of June to September 25th, the figures show. This brings to €45.7 billion the total cash generated by the agency since it began its activities in 2010.

Nama bought Irish banks’ property loans for €31.8 billion in 2010 and 2011 in a bid to save the lenders from insolvency in the wake of a financial crash. It has repaid €32.7 billion borrowed to fund the loan purchases.

At the end of June, the agency returned €2 billion to the exchequer. This was the first tranche of a surplus of €4 billion that the State is expected to receive from Nama over the organisation’s lifetime.

Ronan Group Real Estate and Oaktree will own 80 per cent while Nama will keep a 20 per cent interest in the site.