Gerald D Hines founded the company which has more than 4,800 employees worldwide 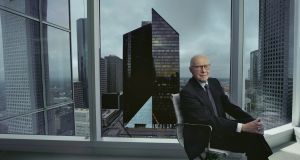 It has a number of interests in Ireland, including the old Central Bank building on Dame Street and the Cherrywood development in south Dublin.

“Meeting with Gerry Hines proved central to my decision to move out of the profession of architecture and into development, when he coached me on how to marry good investment decisions with outstanding architecture and placemaking,” he said.

“He was always highly engaged in the work we did here in Ireland and after visiting Cherrywood some years ago, he insisted we build the three major parks and connecting infrastructure, up front, before any development – and that is what we did.

“It was the right thing to do and Gerald D Hines was always passionate about doing the right thing in development. We are diminished by his passing but greatly enriched for having known him.”

The news of Mr Hines’s death was announced on Monday by his son, Jeffrey C Hines, who has been running the firm as president, and now assumes the role of chairman and chief executive.