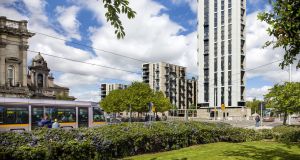 A computer-generated image of the 29-storey block on Parkgate Street as seen from Heuston Station.

Developer Joe O’Reilly’s Chartered Land will submit a fast-track planning application to An Bord Pleanála today for the development of a 29-storey apartment building at Parkgate Street in Dublin’s inner city.

The proposed 93m (305ft) tower forms part of a major mixed-use complex Mr O’Reilly is aiming to deliver on the landmark Hickeys site. The residential element of the scheme is set to comprise 481 studio, one- and two-bed apartments distributed across four blocks ranging in height from eight storeys to 29 storeys. Some 3,698sq m (39,805sq ft) of space will be dedicated to office use while a further 658sqm (7,083sq ft) will be reserved for retail, cafe and restaurant space.

Depending on planning approval, Chartered Land anticipates that development of the site could commence by the middle of this year, with an expected completion date of late 2022.

Designed by Reddy Architecture and Urbanism in co-operation with Lafferty Project Managers, the Parkgate Street site’s 29-storey tower is intended by the developer to serve as a visible landmark for Dublin, with many of its floors commanding views of the city centre and Phoenix Park.

The development will feature numerous amenities including a residential communal courtyard, a co-working space, a gym, multipurpose function rooms and games rooms.

The proposed scheme also provides for the restoration of several protected structures on the site, which had been in use by Hickeys as a Wholesale Warehouse for over 40 years. The wider project also envisages opening up access to a currently inaccessible section of the river Liffey waterfront through a newly-provided public plaza.

Commenting on the proposal, Chartered Land project director, Eoin Wilcox, said, “Each detail of the project has been carefully considered with the ever-evolving needs of a modern city and society at the forefront of our planning. With Ireland’s population expected to rise significantly in the coming decades, urban regeneration and building upwards is required to meet increasing demand.”

While the 29-storey building Chartered Land is looking to build on the Hickey’s site might be considered overly-ambitious by some, it would appear to be consistent with the provisions of the Dublin City Development Plan. This identifies Heuston Station and its environs as a Strategic Development Regeneration Area. The area known as the “Heuston Gateway” is identified as a western counterpoint to the docklands, offering the potential for buildings of over 50m (16 storeys) in height.

The docklands area has already seen applications for higher-rise apartment buildings from a number of other developers. Last October, Sean Mulryan’s Ballymore sought permission from An Bord Pleanála for a 23-storey residential tower (79.45m/261ft) as part of the wider Connolly Quarter mixed-use scheme it is aiming to build on a 2.88 hectare (7.12 acre) site adjacent to Connolly Station in Dublin 1.

Developer Pat Crean’s Marlet Property Group meanwhile is awaiting the outcome of an appeal by An Taisce to An Bord Pleanála of its plan to increase the height of an 11-storey office block it is developing on the site of the former Apollo House to 21 storeys (79m/259ft) through the addition of a a 10-storey tower with 54 apartments.

Elsewhere in the city, Johnny Ronan’s Ronan Group Real Estate is hoping to increase the number of apartments on the company’s 1.8 hectare (4.6 acre) Project Waterfront site in the north docklands from 420 to 1,000 units by distributing the scheme across two towers rising in height to 44 and 40 storeys respectively.

At 155m (508ft), the taller of these blocks would be more than three times the height of Liberty Hall (51m/167ft). At 22 storeys (79m/259ft) meanwhile, Kennedy Wilson’s Capital Dock development remains the tallest residential scheme in Dublin city centre currently.