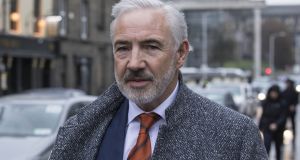 A long-running legal row over the bankruptcy of developer Sean Dunne and €14 million from the sale of a house on Dublin’s Shrewsbury Road has been settled.

The High Court heard on Tuesday that following “sensitive discussions”, three separate lawsuits over the sale of the house, Walford, have been settled.

Chris Lehane, the official assignee, who handles Mr Dunne’s bankruptcy in the Republic, is suing Cyprus-based Yesreb Holdings as part of his efforts to recover assets for the former property player’s creditors.

Mr Justice Denis McDonald adjourned the case for a week after reading the confidential settlement’s terms.

Bernard Dunleavy, Mr Lehane’s senior counsel said three sets of proceedings were settled and that involved “a series of complex steps to be taken in other jurisdictions”.

He sought a week to allow for the implementation of this, after which an application will be made to strike out all the proceedings.

Yesreb holds around €14 million from the sale in 2016 of Walford to Celtic Trustees, established by businessman Dermot Desmond for his children’s benefit.

Mr Dunne originally bought Walford for his second wife, Gayle Killilea, at the height of the boom in 2005 for a record €57.8 million.

However, he maintained that the property always belonged to Ms Killilea and that he never had any interest in it. The couple have since divorced.

In one action, Mr Lehane sought to establish that Mr Dunne, who was declared bankrupt in 2013 both here and in the US, was connected with the sale of Walford.

The Dunnes initially denied having any connection with Yesreb but later asserted it had been owned by John Dunne, a son of Mr Dunne’s first marriage, as Ms Killilea had gifted it to him. John Dunne was described as a director of Yesreb.

The settlement came after Mr Justice McDonald was told on Friday that Sean Dunne, a witness but not a party to the High Court case, had separately asked a New York court to restrain John Dunne from using funds held by Yesreb.

Mr Lehane had sued Yesreb here in a bid to recover the proceeds of the sale for the benefit of the estate of Mr Dunne, whose Irish bankruptcy has been extended for 12 years over failure to co-operate with the official assignee. Celtic Trustees was a notice party in that case.

In a second case, Celtic, Mr Desmond and members of his family sued Mr Lehane and the Insolvency Service of Ireland over the alleged leaking of confidential material to a newspaper concerning an agreement to buy Walford.

In a third case, Celtic sued Mr Lehane claiming it had good title to Walford. All three cases are now settled.