With banks loathe to lend more than 70% for development, financiers are stepping into the breach 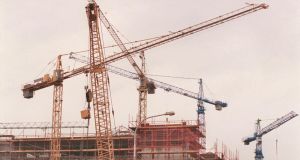 Since the crash, banks have been hesitant to lend to builders even as borrowing costs for banks plunge. (Photograph: Alan Betson/The Irish Times)

Alan Merriman used to chase Irish real-estate developers around Dublin, competing with other bankers to lend them money before the market’s crash devastated the economy. Now, he says they come to him.

Merriman is among a new wave of financiers taking equity stakes in developments and providing high-risk loans to builders that carry interest rates of more than 10 per cent.

“The pendulum has very much swung,” said Merriman, 48, whose Elkstone Private Advisors has backed more than 10 projects since 2013. “If you go back in the past, developers were able to price and dictate their own deals.”

Since the crash, banks have been hesitant to lend to builders even as borrowing costs for banks plunge.

The yield on Allied Irish Banks’s November 2016 bond has fallen to 1.28 per cent from 2.88 per cent when it was sold in 2013, just before Ireland exited its bailout program. At the height of the crisis, in March 2011, a senior unsecured AIB bond yielded 16 per cent, amid concern the banking system would collapse under the weight of bad property loans.

“The days of having the kind of leverage we had before, which caused most of the problems in Ireland, that’s gone,” said Alan McIntosh, chairman of Cairn Homes. The building company raised €440 million in June from selling shares to investors including hedge funds Lansdowne Partners LP and Moore Capital Management LP.

During the boom, builders relied on bank loans for up to 100 per cent of a project’s costs.

The banks that survived the crash today say they avoid speculative loans for construction. Bank of Ireland won’t lend more than 70 per cent of a development’s costs, according to Paul McDonell, head of the firm’s property finance group. So, developers have to look elsewhere for the 30 per cent.

This is where the new backers come in, offering to take a shareholding in a project or make a so-called mezzanine loan, a form of high-risk, high-yield debt.

“It’s a real conundrum for the industry,” said Michael O’Flynn. Once one of the country’s biggest developers, O’Flynn is now building again with backers including Elkstone. “The industry will have to accept that their slice is going to be a lot less than what it used to be.”

Others, like Cairn, are seeking different routes to raise cash. It was the first Irish construction company to sell stock to the public in almost two decades. A fund backed by US billionaire Wilbur Ross is financing Johnny Ronan, whose Treasury Holdings Ltd. racked up hundreds of millions of euros of debt to Irish banks during the boom.

Trouble is, for some, interest rates are too high.

“The people who are there in the industry want to get back building,” said Hubert Fitzgerald, a director at the Construction Industry Federation, a lobby group. “They want to get working on site but you can only do that when the project is viable and bankable.”

Finance Minister Michael Noonan told a conference in March that they must “embrace the financing options that are available” or face being left behind. Builders hesitant to accept an equity investment must realise that the “boom-time funding model” is over, Noonan said.

Back in his central Dublin office, Merriman waits for business to roll in. Elkstone manages the fortunes of wealthy individuals and families. He declined to specify the value of the firm’s assets under management.

“Developers gradually became too important to the Irish banks,” said Merriman, the former finance chief at EBS Building Society, which had to be rescued by the state. “The market changes. The world changes.”