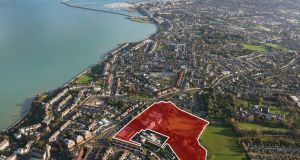 Developer Paddy McKillen jnr’s Oakmount could be in line for a return of up to 50 per cent on its original €30 million investment in a prime residential site at Blackrock, in south Dublin.

Having obtained planning permission for 291 apartments on the 10-acre holding in June of last year, McKillen and his business partner, Matt Ryan, have put the St Teresa's lands up for sale through agent Knight Frank at a guide price of €45 million.

Located less than 500m outside Blackrock village on lands formerly owned by the Daughters of Charity of St Vincent de Paul, the site which has more than 250m of frontage to Temple Road is being offered to the market in one or more lots.

Lot 1 comprises St Teresa’s House, a gate lodge and several vacant buildings which have been unoccupied for a number of years, on a site area of 9.8 acres, while lot 2 consists of a residential dwelling known as “Carmond”situated on 0.2 acres. Lot 3 comprises the entire 10-acre holding.

In terms of the existing planning permission, Oakmount secured approval from An Bord Pleanála for 291 apartments with creche facilities, set out in 13 buildings ranging in height from one to eight storeys. A portion of the accommodation would also be provided at the existing St Teresa’s House and gate lodge. Victorian in design, the property was once the home of Lady Arnott, the wife of John Arnott who owned the department store bearing the family name.

While giving approval for the scheme, the inspector’s report issued as part of An Bord Pleanála’s decision noted that the site could cater for additional height, particularly fronting on to Temple Road and overlooking the adjoining Rockfield Park.

Prospective purchasers of the Blackrock site will be minded to the provisions of the Urban Development & Building Heights Guidelines published by Minister for Housing Eoghan Murphy in December 2018. These allow planning authorities to supersede the maximum building heights outlined in local authority statutory development plans, thereby removing blanket limitations on building heights and allowing for sites to be assessed on a case-by-case basis.

A feasibility study prepared in advance of the sale by architects O’Mahony Pike, in conjunction with Brock McClure planning consultants, suggests the holding could accommodate two increased density Build-to-Rent (BTR) apartment schemes comprising between 493 and 521 units.

The site has a mature, landscaped setting and is bounded by Temple Road to the north; Rockfield Park to the south; and existing residential developments to the east and west.

The site is well served by public transport thanks to its immediate proximity to the Temple Road QBC (quality bus corridor), and the location of both Blackrock and Seapoint Dart stations nearby.

Blackrock is situated 7km to the southeast of Dublin city centre and is widely regarded as one of the capital’s most sought-after and affluent residential locations. The seaside village is home to a number of popular restaurants, bars and shops while more extensive shopping facilities are provided at the nearby Frascati and Blackrock shopping centres.

Selling agent Knight Frank says: “This site will be highly sought-after by a mixture of both domestic and international purchasers. Furthermore, our recent Knight Frank PRS tenant survey shows that a high percentage of renters are willing to pay an increased rent in order to reside in highly sought-after areas such as Blackrock where they cannot afford to purchase, thus allowing them to avail of the various amenities associated with such locations.”