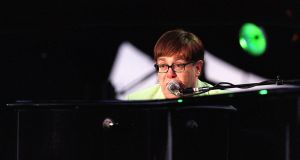 A former lord mayor, the chief executive of Visit Belfast and other senior figures from the public and private sectors in the North are among 11 people who have received a boardroom ban in respect of their conduct as directors of the failed Northern Ireland Events Company.

The NI Events Company was a government quango set up 1997 to promote a positive image of Northern Ireland. It organised high-profile events designed to deliver a feel good factor, including staging concerts featuring Elton John and Pavarotti in the grounds of Stormont.

It collapsed in 2007 with debts totalling £1.6 million (€1.8m) and a subsequent investigation carried out by the North’s Public Accounts Committee concluded it was “the biggest scandal” since devolution and was “completely shocking”.

Nearly 10 years ago, the Department for the Economy appointed inspectors to investigate the affairs of the NI Events Company and decided to issue proceedings against the board members.

On Monday, the department confirmed it has accepted disqualification undertakings from the former chairman of the events company, Mervyn Elder (73) of Belfast, for nine years.

The current chief executive of Visit Belfast, which markets the city as a world class destination, Gerry Lennon (53) of Moira, was disqualified for five years as was the former lord mayor of Belfast, Jim Rodgers (74) of Holywood.

In addition, Jasper Perry (40) of Davenport, England was disqualified for eight years in the High Court in Belfast, in respect of his conduct as a director of the company.

The Department for the Economy had previously accepted a disqualification undertaking for 14 years from Janice McAleese, who was a former chief executive of the NI Events Company.

The department said that among the matters of misconduct, applicable to all of the board members, which “solely for the disqualification procedure were not disputed”, included failing to comply with their duties as directors of the company by failing to provide adequate oversight and control.

The directors also failed to ensure “sufficient principles of corporate governance were in place” and shared “collective responsibility” for failing to ensure that the NI Events Company maintained accurate accounting records to allow the financial position of the company to be “determined with reasonable accuracy at any point in time, particularly in relation to budget over-spends”.