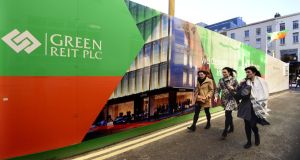 A Green Reit sign at a former development site at Molesworth and Dawson Street in Dublin. Photograph: Cyril Byrne

Abbvie, the US pharmaceuticals giant landed with a €500 million-plus Irish tax bill last year as it was caught in the crossfire of a crackdown on a certain type of takeover, must be mightily glad it has won an appeal.

Surely it’s only a matter of time before the real target – the purchaser of Green Reit – demands a refund.

The Irish Tax Appeals Commission published its determination on the Abbvie case on its website last week in a heavily-redacted document that did not name the appellant.

Abbvie’s surprise tax bill resulted from a move by Minister for Finance Paschal Donohoe in October 2019 to slap a 1 per cent stamp duty on so-called scheme of arrangement takeover structures, which involve the company being acquired cancelling its existing shares and issuing new stock to the acquirer.

The budget measure was clearly aimed at Green Reit’s €1.34 billion sale to UK real estate investment firm Henderson Park, which was in the works at the time. However, Abbvie was caught as it was using a similar structure to take over Dublin-based Allergan.

Henderson Park’s woes were compounded as Donohoe removed some of the capital gains tax (CGT) relief for real-estate investment trusts (Reits) if they are taken off the stock market – like Green Reit – within 15 years of floating. Henderson Park’s combined stamp duty and CGT liability was estimated at about €65 million.

The Tax Appeal Commission agreed with Abbvie’s argument the stamp duty bill amounted to a retroactive tax, which is not allowed, and that the key date was when Allergan agreed to be taken over. This predated Donohoe’s move – even though the deal was completed at a later date.

Henderson and the lawyers at A&L Goodbody, who advised it on the Green Reit deal, refused to be drawn on Monday, but the commission’s determination must have piqued their interest.