James Lenton will stay in his position until a successor has been appointed, he has said 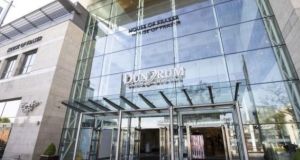 Along with Dundrum, Hammerson owns stakes in the Swords Pavilions and Ilac shopping centres in Dublin.

Dundrum Town Centre owner Hammerson has announced that James Lenton is to step down from his role as chief financial officer.

The board informed the Irish stock exchange on Friday that it has commenced a search for his successor. Mr Lenton will continue as chief financial officer and as an executive director of the company until his successor has joined.

Along with Dundrum, Hammerson owns stakes in the Swords Pavilions and Ilac shopping centres in Dublin, where it also plans a major redevelopment of the area around Moore Street. The UK-based group has operations in several European countries.

Mr Lenton said: “Following successful completion of the rights issue, Via Outlets disposal and induction of the new chair of the board and CEO, I feel now is the right time to look for a new opportunity. I remain fully committed in the role until my successor is in place.”

“I am grateful for his support and commitment to continue until his successor joins,” she added. “We wish him well for the future.”