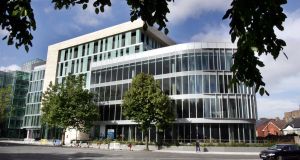 Blackstone is set to acquire a 75 per cent share in the Burlington Plaza office complex on Burlington Road Photograph: Matt Kavanagh

US private equity giant Blackstone has indicated its intention to acquire a majority interest in two of Dublin’s foremost office assets.

The company has notified the Competition and Consumer Protection Commission (CCPC) of its intention to purchase the stakes held by another major US property investor, Colony Capital, in the Burlington Plaza office complex on Burlington Road and the headquarters of Three Ireland on Sir John Rogerson’s Quay.

The properties are valued at €204 million and €120 million respectively. Colony could potentially secure up to €153 million from the sale of its three-quarter interest in Burlington Plaza and a further €86 million for its 72 per cent interest in Three Ireland’s headquarters.

The Irish Times first reported on the US private equity giant’s intention to purchase both blocks last month. The CCPC was notified of Blackstone’s bid in a formal merger notification last Friday,

The proposed sale is part of Colony Capital’s planned disposal of its wider Irish property interests. The Los Angeles-headquartered group initiated that process in May of last year with a number of targeted approaches to potential suitors.

The sale of Colony’s portfolio was put on a more formal footing subsequently with the appointment of Eastdil Secured to handle the process.

The US firm acquired its share of Burlington Plaza and Three Ireland’s headquarters as part of its purchase for €455 million in 2017 of Nama’s €1.5 billion Project Tolka loan book which saw Colony take control of loans linked mainly to the late John Flynn, fellow developer Paddy Kelly, and the Dublin-based McCormack family, who control the property investment vehicle Alanis.

Colony’s other Irish interests, which it holds both directly and indirectly, and as part of a joint venture with the British property group, U+I, include Donnybrook House, 23 Shelbourne Road and Carrisbrook House in Dublin 4.