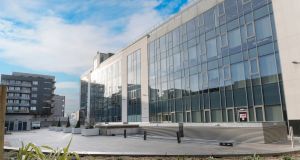 A vacant office building in the north Dublin docklands bought by the Comer Group in 2013 for around €5 million has been fitted out and sold on to the South Korean-based Kookman Bank as a long-term investment for €101 million.

The 190,000sq ft Beckett Building on East Wall Road was originally developed by Liam Carroll of Zoe Developments shortly before the collapse of the property market in 2007. Six years later it was offered for sale on the instructions of receivers acting for the Bank of Scotland (Ireland) and was bought by the Comer Group.

The Comer Group is understood to have spent a further €30 million on a high-quality fit out before letting it to Facebook on a 15-year lease at annual rent of €4.53 million. The rent works out at €250 per sq m (€23.50/sq ft) – substantially less than the going rate in the docklands.

Paul McGreevy of McGreevy Property Consultants, who acted for the Comer Group, said the Beckett Building attracted interest from institutions in the Middle East , Far East, the UK and mainland Europe even though it was not openly marketed in those regions.

Luke Comer, chairman of the Comer Group, said the group would continue to invest in Ireland through their development pipeline and would continue to seek opportunities and adding value. “We estimate that our portfolio is now worth over €2 billion in Ireland and we have set our goals to deliver over 10,000 residential units over the next five years in Dublin, Cork and Galway.”

Comer said the coming year would also see the commencement of a master plan for the Metro Park site near Dublin Airport, which had the potential to accommodate more than 17 million sq ft of development and must be one of Europe’s most strategic sites.