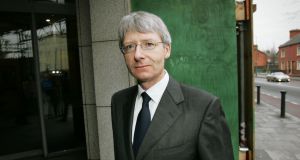 Total Produce chairman Carl McCann. Sumitomo’s sale of its stake in Balmoral to members of the McCann family give the McCanns or companies linked to them a controlling stake in the property group. Photograph: Frank Miller

Sumitomo Corporation, the Japanese conglomerate, may have been founded almost a century ago initially to engage in real-estate management. But it’s one of the few overseas buyers of Irish assets in recent years not here for the property deals.

The Tokyo-based group stumped up €751 million more than a year ago to acquire Fyffes, the tropical fruits group that had lately expanded into mushrooms.

As part of the deal, it inherited a 30 per cent stake in property group Balmoral International Land, which was spun off from Fyffes in 2006 as a separate publicly quoted company (then called Blackrock International Land) containing the fruit group’s real-estate assets.

Blackrock had a short and sad life as a listed company, suffering large losses during the downturn as it was forced to write down the value of its assets. It was renamed in 2010 and left the junior Dublin and London stock exchanges the following year with its tail between its legs.

Balmoral’s net assets have surged 2½ times to €59.7 million – reflecting rebounding property values, asset sales at a premium to how they were accounted for on the company’s books, and ongoing efforts to pay down debt.

However, the company confirmed to The Irish Times over the weekend that Sumitomo saw fit last August to sell off its stake in the firm.

The buyers? Members of Dundalk’s McCann family which built up the Fyffes group over the decades. The McCanns or companies to which they are linked now have a controlling 55 per cent stake in Balmoral.

Having received €87 million from the sale of their almost 12 per cent stake in Fyffes last year, the McCanns are now effectively the main landlord to the company. Fyffes continues to account for almost 15 per cent of Balmoral’s €8.4 million annual rental income.