Disney close to €51bn deal to take over Fox assets

Final price and the future of James Murdoch remain under negotiation 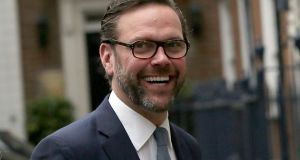 James Murdoch, Fox’s chief executive, has been mooted for a senior role in the combined group. Photograph: Neil Hall/Reuters

Walt Disney is closing in on the entertainment assets of Rupert Murdoch’s 21st Century Fox in an all-share deal that stands to reshape Hollywood and the rapidly digitising global media industry.

The deal, valuing the Fox assets at about $60 billion (€51 billion) including debt, could be announced as early as Thursday, according to people briefed on the negotiations.

It would see Disney add 20th Century Fox, home to the Avatar and X-Men film franchises, to its own studio, as well as international pay-television brands from Sky in the UK to Star in India, regional US sports networks and Fox’s stake in the Hulu digital streaming service.

Fox’s remaining assets, including the Fox broadcast network and Fox News Channel will be spun off into a new company worth about $10 per share, said one person briefed about the transaction terms.

Among the final details still being hammered out on Tuesday were total price to be paid by Disney and the future of James Murdoch, Fox’s chief executive who has been mooted for a senior role in the combined group, which would end 20 years working for his father Rupert.

Negotiators were also discussing what measures would need to be taken to meet tougher regulatory scrutiny in Washington, where the Trump administration recently blocked AT&T’s $85.4 billion acquisition of Time Warner unless it sells off some of its broadcast networks.

The key regulatory sticking points are likely to be the combination of the two movie studios and Disney’s dominant position in sport, and negotiators were discussing whether production would have to be scaled back at the acquired studio. – Copyright The Financial Times Limited 2017

1 How can I view my dead brother’s will if I’m not the executor?
2 Analyst doubles projection for Tesla shares to $1,200
3 Kerry’s Chinese sales set for 30% hit from coronavirus
4 Provisional liquidator appointed to Dublin engineering firm
5 Bursting of Tesla bubble a case of ‘not if, but when’
6 Finance Ireland plans stock market flotation in May
7 Bank of Ireland staff in line for 2.95% pay increase
8 US reiterates opposition to Huawei equipment being used for Irish 5G
9 Flutter’s planned merger with Stars gets informal approval in Australia
10 Number in employment rose 3.5% in final quarter
Real news has value SUBSCRIBE