Developers of former Central Bank to spend €100m on renovations

City centre project to be ready for tenants from next August 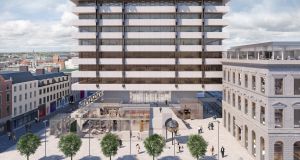 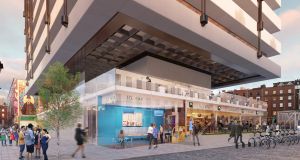 Retail tenants have yet to be finalised. 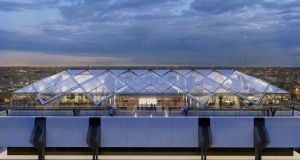 The building will have a glazed rooftop dining area.

The developers of the former Central Bank headquarters on Dame Street in Dublin and neighbouring buildings will spend €100 million renovating them as a mix of offices, retail, restaurants and cafes.

In an exclusive interview with Inside Business, a podcast from The Irish Times, Brian Moran, country head in Ireland for US property group Hines, said the renovation costs were in addition to the €75 million purchase price for the city centre buildings, which are being developed in partnership with Hong Kong’s Peterson Group.

Mr Moran also revealed that the building will become available to tenants for fit out from August 2020 and that Hines and Peterson intend to sell it on once the project has been fully completed.

“Our business plan with Peterson is to sell once we’ve completed but we need to get to that point in time first,” he said. “Get the income fully stabilised, get the building finished and then more than likely we’ll transact the building on the market.”

Mr Moran said 80 per cent of the buildings at the site have been leased out, including eight floors of the Sam Stephenson-designed Central Bank office block to We Work, the troubled US-based office-sharing company.

Given We Work’s recent difficulties, will it actually take up its lease at the former Central Bank head office?

“The lease is signed here and we did that long before they ran into their current hiccup so at this point in time the intention is that they will proceed on and get this leased up,” Mr Moran said, adding that about 1,200 workers will be accommodated in the newly refurbished offices.

Mr Moran said We Work has reported “very significant interest . . . from tech companies” in what is now branded as Central Plaza. “The building is incredibly iconic.”

On the wider development, he added: “We’re 80 per cent leased now, which is great. Twenty per cent to go which is some of the last few shops . . . retailers will take a little bit of time. We’ve contracted rent that is a very strong return on our money.”

The new Central Plaza building will also include a large, glazed rooftop dining area with an outdoor terrace, offering 360-degree views of the city. This new space will be illuminated at night and is expected to be a major draw for visitors to Dublin.

Hines completed the acquisition of the former Central Bank buildings on Dame Street in early 2017 after a lengthy sales process. The financial regulator moved to a larger office block on the north docks.