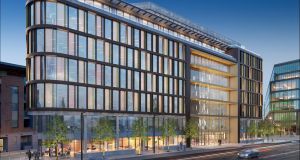 35 Shelbourne Road occupies a pivotal position at the heart of Ballsbridge in Dublin 4.

While developer David Daly may be preparing to market 35 Shelbourne Road, with the tag line #workinanewlight, it looks as though the landmark office scheme is already benefiting from what one might call the “Facebook effect”.

Located on the site of the former IPC building at the heart of Ballsbridge, Dublin 4, the property which is due for completion in April 2020, is understood to have been the subject of a flood of inquiries from potential tech sector and professional services occupiers over recent months. Most if not all, are understood to have one thing in common: they’re looking to locate their operations within close proximity to Facebook’s new European headquarter campus, which is now under development at the AIB’s former Bankcentre premises on nearby Merrion Road.

The decision by Irish-owned global aviation leasing giant Avolon to locate its headquarters at the neighbouring Number One Ballsbridge office scheme is also said to have served to enhance the appeal of Dublin 4 for prospective corporate occupiers, many of whom would traditionally have looked to locate in the city’s central business district.

Having already received numerous inquiries in relation to the space at 35 Shelbourne Road, agent Cushman & Wakefield will this evening initiate the formal marketing process for the building at a launch for agents at the MSL Ballsbridge Motors Mercedes Benz dealership. Quite apart from the interest in the property itself, the event is expected to attract a large turnout thanks to the appearance of five-in-row winning Dublin football manager Jim Gavin.

Daly will no doubt be hoping his decision to bring Gavin on board for the event will help to drive home the message that 35 Shelbourne Road is a best-in-class office scheme.

All told, the property will, upon completion, comprise 87,500sq ft (8,129sq m) of office space which Karl Byrne of Cushman & Wakefield says will be finished to a higher standard than other grade A buildings currently on the Dublin market.

Floorplates at the six-storey block will average 13,000sq ft (1,207sq m) , with the top two floors benefiting from large terraced spaces with sweeping views south. The terrace floor space in its entirety will comprise 4,445sq ft (413sq m). The building is being finished to a nearly-zero energy building standard, in keeping with the most eco-friendly companies’ requirements on corporate social responsibility. Cushman & Wakefield’s marketing tagline of #workinanewlight meanwhile stems from number 35’s six storey atrium-style reception which, thanks to the property’s orientation, will be filled with natural light.