Northland Properties owns hotels in Canada, US and UK, as well as Dallas Stars NHL team 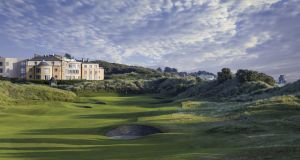 A major Canadian hotel operator has bought the Portmarnock Hotel & Golf Links from US real estate investment group Kennedy Wilson for about €50 million.

The completion of the deal on Wednesday sees ownership of the famous Dublin golf resort pass to the Vancouver-headquartered hospitality specialist, Northland Properties Group. The purchase represents the company’s first investment in the Irish market.

Established in 1963, Northland Properties is owned and operated by the family of its founder, the billionaire businessman Bob Gaglardi. The company’s portfolio is extensive and comprises more than 50 hotels and 140 restaurants distributed across Canada, the United States and the UK. Northland’s various brands include the Sandman Inn hotels, the Sutton Place hotel chain, as well as Moxie’s Bar & Grill and the Canadian franchise for Denny’s restaurants. In 2011, the company, which is headed up by Bob Gaglardi’s son, Tom, acquired the Dallas Stars NHL Hockey Club.

The sale of the Portmarnock Hotel & Golf Links to Northland meanwhile provides Kennedy Wilson with an impressive return on its investment in the Dublin property. Since acquiring the resort for € 27 million in 2014, the Los Angeles-headquartered investor spent a further €5 million on a refurbishment programme involving a thorough upgrade of all 134 of its guestrooms, and its banqueting and conference facilities. A new award-winning spa and enhanced golf facility were also added.

Dan O’Connor of JLL and Mason Hayes & Curran advised Kennedy Wilson on the sale of the property. Commenting on the deal, Mr O’Connor said: “The sale attracted a wide range of domestic and international interest and its completion is a significant vote of confidence in the Irish golf and hotel market.”

Located on a site of 160 acres immediately adjacent to Dublin’s “velvet strand”, the Portmarnock Hotel & Golf Links’ history dates back more than 172 years. The property was once the family home and private golf course of the Jameson whiskey family. The resort is best known now for its 18-hole championship links golf course, which was designed by two-time Masters champion Bernhard Langer.