Developer had high profile in Dublin residential and commercial property 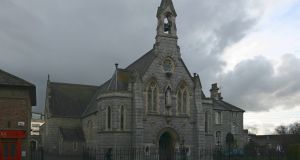 Bryan Cullen’s funeral was held in the Church of the Holy Cross, Dundrum.

The funeral has taken place in Dublin of property developer Bryan Cullen, who died suddenly at the weekend. He was 55.

Mr Cullen, the former head of a consortium that owned the Gresham Hotel Group, was buried in Kilmashogue cemetery in the south of the city on Thursday morning.

The developer had a high profile in the city’s residential development sector, mainly through his involvement with Jackson Homes. Many years ago, he was also involved in housing developments with members of the well-known Cosgrave family of builders.

Using his Precinct Investments vehicle, in 2004 he bought the Gresham group, named after its flagship property on Dublin’s O’Connell Street. It was sold to Spanish investors for €92 million in 2016.

Not long after it bought the Gresham group, Mr Cullen’s consortium also launched an unsuccessful bid for Jurys Doyle hotel group, in which he held a minority stake.

A note on RIP.ie said Mr Cullen is survived by his three children, his partner, extended family, and a wide network of friends.