Industrial take-up in Dublin on the up, says CBRE 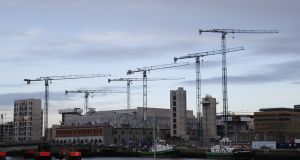 The year-end take-up figure of 304,530sq m was boosted by a number of pre-letting transactions, said Garrett McClean, executive director and head of industrial and logistics at CBRE. Photograph: Nick Bradshaw/The Irish Times

Take-up in Dublin’s industrial market was up 22 per cent last year on 2017, according to new research by agent CBRE.

The year-end take-up figure of 304,530sq m (3.278 million sq ft) was boosted by a number of pre-letting transactions, said Garrett McClean, executive director and head of industrial and logistics at CBRE.

“The past year was a good one for the industrial and logistics sector in the capital,” according to Mr McClean. “We saw an escalation in planning activity and speculative development commencing along the M1 and N2 around Dublin Airport, as well as along the N3 and N7 corridors. Encouragingly, a number of these new speculative units have been let prior to practical completion, such is the pent-up demand for modern facilities in prime locations, which has boosted take-up volumes over the last 12 months.”

Average vacancy rates in 25 of the most modern industrial and logistics parks in Dublin stand at 8.04 per cent, notes CBRE – down from 8.23 per cent at the end of the third quarter of 2018. “Eight of the 25 parks had no vacancy,” said Mr McClean.

Outstanding demand for industrial space in the capital stands at 30,785sq m (331,367sq ft), maintains CBRE, which expects “Brexit-related demand” to increase in 2019 as companies attempt to streamline and adapt their supply chains, and “some UK-based e-commerce occupiers take a physical presence in Ireland for the first time”.

“The evolution of e-commerce will be a substantial driver of demand within the logistics sector in 2019,” said Mr McClean. “Online retail is fuelling additional demand for industrial and logistics stock to facilitate storage, distribution, final-mile delivery and reverse logistics.”

Industrial assets, however, still comprise a small percentage of the capital’s property investment market – about 3 per cent in 2018, according to CBRE. Meanwhile, it says, prime industrial yields in the capital sharpened further in the last three months of 2018, standing at 5.1 per cent at the end of 2018.