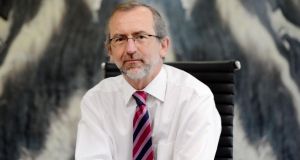 The value of assets owned by the Appian Burlington Property Fund, whose management includes former key figures from Treasury Holdings and the National Asset Management Agency, grew more than 16 per cent last year to €45 million, its latest figures show.

Appian specialises in investing in commercial property outside Dublin city centre and has interests in offices shopping malls in urban areas such as Cork, Louth, Tallaght and Sandyford.

The investment fund’s net asset value grew 16.26 per cent last year according to performance figures for 2018. Appian said at the weekend that to date it has bought seven offices and retail premises, worth €44.95 million on December 31st.

Last year’s growth in the value of its assets, which the fund said was sector-leading, brought total gains on the money it has invested since it was launched in November 2016 to 20.74 per cent. Including cash, the fund’s total value is close €50 million.

Appian’s properties include shops at 73, 74 and 75 Patrick Street in Cork; Bank of Ireland, Drogheda, Co Louth; and, offices at Tuansgate, Tallaght and Boroimhe Shopping Centre, Swords, in Dublin.

Appian recently appointed John Moriarty, Nama’s former head of asset recovery, as the fund’s chairman. Ann Hargaden, investment director at Lisney, has joined him on the board.

Nama and Treasury clashed in the High Court in 2012 when the State agency appointed receivers to assets owned by the property investment company.

Appian Asset Management manages the fund, which is preparing to make its first investments in industrial property, and is looking primarily at logistics and distribution centres. Up until now it has concentrated on offices and retail.

Appian Asset Management chief executive Patrick Lawless said the organisation was pleased with 2018’s performance and the fund’s potential to scale up and buy more properties.

“The fund’s chosen locations and chosen sectors have performed well and we look forward to the progress we have made continuing in 2019 and beyond,” he added.

Burlington Real Estate’s Mr Bruder noted that the outlook was good for the properties Appian was targeting.

“Dublin suburban office and industrial property values are still below their replacement cost and our view is there is still considerable upside in these sectors.

“We are also actively targeting retail units on a selective basis in prime provincial and suburban locations where rents are still less than half of their peak level,” he said.

He added that with the strong economy, retail was an attractive opportunity in the right locations.

Appian typically spends between €5 million and €15 million on individual properties. It is a qualifying investor fund with a minimum investment of €100,000.