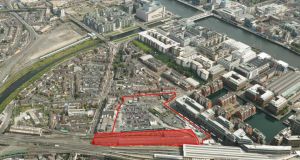 The site, which could accommodate a major mixed-use scheme of 68,284sq m (735,000sq ft), is being offered by way of a development agreement subject to an annual site licence fee, followed by the higher of a premium rent or an income sharing arrangement with the preferred bidder.

A similar approach has been taken by the State transport company in redeveloping Tara Street station where developer Johnny Ronan is looking to build a 22-storey office block. CIÉ indicated it was prepared to grant a 300-year ground lease or take 10 per cent of the annual rental income from the proposed building.

However, Mr Ronan’s plans for a €130 million, 88m-high tower to include offices, 110-bedroom hotel, roof-top restaurant and bar were rejected by Dublin City Council in July.

The Connolly Station site, while outside the docklands fast-track planning Special Development Zone, still represents a chance to develop a landmark scheme integrated with Connolly Station which caters for about 30,000 passengers a day.

It is being offered in two parts. The first extends to about 4.85 acres and comprises the CIÉ car park, CIÉ Group buildings and part of the railway sidings. It is accessed from, and has 200m of frontage to, Sheriff Street Lower. There is also 125m of frontage to Oriel Street Upper and 60m to Oriel Hall.

The second site extends to two acres and is essentially the airspace above the balance of the railway sidings and depot building.

There is planning permission, live until 2022, for a mixed-use scheme on a larger site of which the subject sites form part. That development includes more than 50,168sq m ( 540,000sq ft) of office space, 6,503sq m (70,000sq ft) of retail and restaurant accommodation, a 101-bedroom hotel and 106 apartments. It had been put on the back burner due to the downturn.

A feasibility study prepared by Reddy Architecture suggests a scheme of more than 61,780sq m (665,000sq ft) may be possible on the 4.85-acre site – subject to securing planning permission – with another 6,503sq m (70,000sq ft) over the two acres of railway sidings.

The entire site is zoned Objective Z5 “to consolidate and facilitate the development of the central area, and to identify, reinforce, strengthen and protect its civic design character and dignity”.

This allows for a wide range of uses such as office, residential, hotel, hostel, shops (district, neighbourhood and major comparison), restaurant and car park.

In addition, the current city development plan identifies the Connolly Station site as one of four areas where buildings of more than 50m high may be permitted.

Redevelopment work in the north docks area is starting to pick up. Major developments, such as Dublin Landings and Point Campus, are on-site while clearance work is proceeding apace at Spencer Dock. The Central Bank has also recently taken up residence on North Wall Quay.