Colleges open to deals with developers on student digs 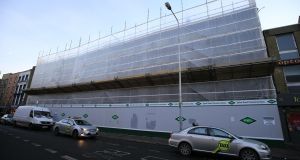 The former Frawleys shop on Thomas Street in Dublin, which closed in 2007. It is to get a new lease of life as student accommodation. Photograph: Nick Bradshaw

A Knight Frank survey of third-level institutes has found that many colleges expect the acute shortage of campus student accommodation to get worse due to more international students being diverted to Ireland because of Brexit.

It also found that two-thirds of colleges are open to the idea of forming joint venture partnerships with private developers to address the supply gap, as student accommodation remains one of the hottest sectors of the building market.

Half of all colleges surveyed plan to carry out additional construction of student accommodation in the coming year.

Knight Frank surveyed colleges in Dublin, the wider Leinster region and Munster. It found a geographic split, with all colleges based in the capital reporting a severe shortage of accommodation space, while under one-third of colleges outside Dublin felt there was a shortage in their area.

Of those who reported a shortage, three-quarters said there was a lack of zoned sites close to their college, highlighting the challenge facing local authorities trying to free up development land to cope with growing student numbers.

Four out of every five colleges are expecting an increase in demand for campus accommodation from international students, but of these, only 44 per cent believe there is sufficient supply available.

Knight Frank highlighted that applications to UK universities from EU students declined by 5 per cent for the 2017/2018 academic year.

It said this was “a clear indication that Brexit is having an impact on the UK higher education sector. Colleges here are optimistic that Ireland stands to benefit, with 45 per cent expecting an increase as a result of Brexit”.

The colleges surveyed had average student populations of more than 11,000, but one-third of them provide no campus accommodation whatsoever.

Almost half provide between 250 and 2,500 beds, with just the very largest institutes providing substantial numbers.

As many students scramble this month to find accommodation, the responses of the colleges surveyed portrayed a bleak landscape in terms of campus vacancy rates. Almost six-in-10 have zero vacancies, while the remainder have vacancy rates of below 5 per cent.

“The September scramble for college accommodation has always been a feature of student life. However, in recent years, this perennial challenge has worsened considerably as the supply shortage in the wider residential market leaves students particularly squeezed,” said Evan Lonergan, a director of Knight Frank.

The student accommodation sector has recently attracted major investors, such as BAM Property and the international Global Student Accommodation group.