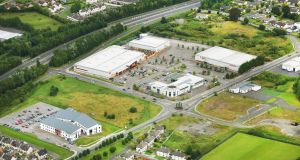 A retail park and neighbourhood centre in Athlone is guiding €4.4 million through Savills.

The quoted price is significantly below replacement cost, while the property also has “asset management opportunities”, according to Roisin Rafferty of Savills.

The Arcadia Centre, developed at the height of the boom in 2006, comprises seven retail warehouse units (four of which are held on long leasehold) and a 4,831sq m (52,000sq ft) B&Q store and garden centre.

The retail park is anchored by B&Q while Applegreen leases the petrol filing station. Applegreen accounts for more than 47 per cent of the current rent roll of €346,000. Other occupiers include Paddy Power and Cooney’s pharmacy.