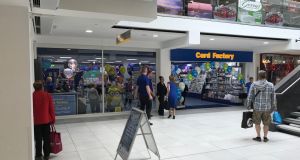 UK greeting card specialist Card Factory is to open six shops in Ireland by October and has ambitious plans for another 69 outlets over the next five years.

The retailer has secured units at Northside Shopping Centre, Drogheda Town Centre and the Courtyard Shopping Centre in Newbridge, along with high-street stores in Ashbourne, Dún Laoghaire and Naas.

Card Store, which is listed on Ftse 250 and had a group turnover in 2016 of £400 million, sells greeting cards, gifts, wrapping and party supplies for the value to mid-market segments. It has more than 850 stores in the UK.

Just Fletcher, property director at Card Factory, said: “Over the last couple of years we have completed a number of detailed studies of the Irish market and its dynamics. We believe there is a significant opportunity in Ireland and aim to open 75 stores here.”

Daniel McLaughlin, associate director at Bannon, said: “Card Factory is in negotiations for a further six stores with anticipated opening dates between February and March 2018. The aim is to secure a further 10-15 stores by the end of 2018.”