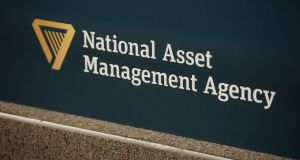 Nama has invested €350 million to date in refurbishing, finishing and buying properties to be used for social housing.

Builders funded by the National Asset Management Agency hope to get permission to build a further 8,500 new homes this year, according to its annual review.

The State assets agency, which took over the Irish banks’ property debts in 2010 following their collapse two years earlier, funded the construction of 7,200 houses and apartments between 2014 and the end of 2017.

Its annual review, published on Thursday, states that its client have either sought planning permission, or will in 2018, for a further 8,500 new homes.

The agency is lending cash to developer clients, or receivers appointed over some of their businesses, to build the homes. They will then repay Nama once the properties are sold.

Along with the 7,200 already completed, work has begun on a further 2,500, while local councils have granted planning permission to Nama-backed builders for another 7,000 new houses and apartments.

Planning laws require that a portion of the homes that Nama funds to be ringfenced for social housing.

Separate to this, the review also shows Nama has invested €350 million to date in refurbishing, finishing and buying properties to be used for social housing.

The organisation provides the funding needed to carry out and work needed to make properties habitable so that they can be used for social housing.

It has established a special subsidiary, National Asset Residential Property Services, which buys suitable buildings and leases them to councils and other approved social housing bodies.

Nama says it has provided 2,456 houses and apartments for social housing since the start of 2012.

The Government’s proposed Home Building Finance Ireland, which will have €750 million to fund commercially viable housing developments, will draw on Nama’s skills, once it is up and running later this year.

Nama has an 80 per cent stake in the Dublin docklands strategic development zone, where work is under way on 180,000sq m of offices and 480 apartments.

The development zone covers the Grand Canal area on the south side of the river Liffey and the North Lotts on the opposite bank.

Nama is working with various private sector developers on several projects there, including Boland’s Mills on the Grand Canal Basin and Capital Dock, close to the East Link Bridge.

Over the course of 2017, Dublin City Council gave planning permission for a further 90,000sq m of offices and 900 apartments in the zone.

The repayment cleared the State of a contingent liability and was made three years ahead of originally scheduled.

Nama expects to generate a €3 billion surplus for the State once it has finished its work.