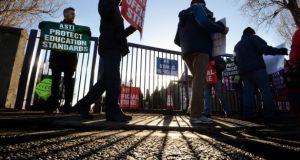 Campaigners against the proposed new public service agreement have urged State employees to vote against the draft deal and said union negotiators should “be sent back for more”.

A group of rank-and-file activists from a number of different unions said on Friday the proposed agreement made permanent the existing pension levy for most public service workers and institutionalised a two-tier pay structure.

They also contended that the draft deal made permanent additional unpaid working hours which were introduced during previous agreements and argued the pay rises on offer were insufficient and did not keep pace with inflation.

The activists said under the proposed accord sanctions available to the Government under financial emergency legislation – known as Fempi – would remain in place and would be used against trade unions that rejected the draft deal.

The group held a press conference on Friday to highlight their opposition to the proposed agreement.

Former honorary secretary of the Teachers’ Union of Ireland (TUI) Eddie Conlon, who convened the press conference, said the proposed deal did not meet the expectations of public service workers.

He said if the proposed deal was rejected, union leaders could return to talks to seek a more favorable arrangement.

He maintained that the leadership of the trade union movement were not prepared to fight for anything and would “roll over” at every opportunity for whatever the Government threw at them.

“The average public sector will be worse off because of this agreement. Pay increases will be about 4 per cent while inflation will be 5.6 per cent over the period of the agreement. They will see their pension contribution increase by €1,310 a year.”

“It is insulting to say that this agreement will see the end of Fempi cuts for most public sector workers when the pension levy is being turned into a permanent pay cut. Based on figures in the Pay Commission Report a worker on €40,000 in 2009 has lost over €51,000 since then (130 per cent of a full year’s salary).

“They will not get a penny of this back.””

Terry Murphy, a member of the executive of the Civil Public and Services Union (CPSU) and who was speaking in a personal capacity, said his organisation should urge its members to oppose the deal.

He said the Government was seeking to “bribe” civil service unions with a number of side deals which offered additional leave or promotions to a higher pay scale in return for backing the proposed agreement.

“There is intense anger amongst CPSU members about the additional hours that were forced on them. It is a joke to talk about work-life balance when people are being forced to work extra hours.

“Public servants have worked 15 million additional hours for free, saving the Government €600million. The CPSU position is that these hours should end. Therefore the union should recommend that members vote ‘No’.”

Mark Walshe, of the ASTI activist group Fightback, said the draft agreement represented “another one-size-fits-all deal” which offered absolutely nothing to teachers.

“It fails to remove the unpaid Croke Park hours. It categorically rules out equal pay for teachers and it stages a further raid on teachers’ pensions. The only rational response is to vote ‘No’,” he said.

“All the teacher unions are committed to equal pay so they must agree to a united campaign for pay equalisation.”

Kieran Allen, president Siptu UCD said: “”This deal is another failure for our members. The union leaders went into the talks and accepted the limits on public spending set out by the government. No demands were raised for increased taxation on the rich and the wealthy to properly fund public services and the people who work in them. ”

Jo Tully, secretary Dublin South West Branch of the Irish Nurses and Midwives Organisation (INMO) and who was speaking in a personal capacity, argued that the issues of concern to nurses and healthcare staff were not addressed in the proposed accord.

On Thursday the country’s largest trade union, Siptu urged its 70,000 members in the public service to back the proposed agreement in a forthcoming ballot.

Siptu’s national executive said it had decided to recommend acceptance of the proposals, on balance, “as the benefits, such as the protections against outsourcing in particular, as well as other positive elements, outweigh the potential for what might be gained by running the risk of rejection”.

The country’s largest public service union, Impact, has also urged its 60,000 members to accept the deal in a ballot.

1 Aldi to impose limits as Christmas toys go on sale
2 Fair deal? Family at odds with hospital and each other not so sure
3 Irish house prices could buck European trend and fall this year, says S&P
4 Monsoon landlords win challenge over creditors arrangement that cut rents
5 ‘I hate haggling because I hate when people do it to me’
6 First look: Is the iPhone 12 Pro the best smartphone out there?
7 Irish elearning company LearnUpon closes €47.4 million investment
8 Leslie Buckley’s criticism of inspectors ‘built on thin air’
9 Ulster Bank to meet Paschal Donohoe to discuss bank’s future
10 What to consider if older person or loved one needs care at home
Real news has value SUBSCRIBE