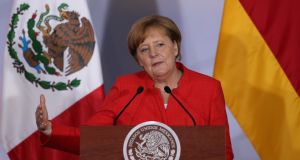 Germany’s private sector grew at a slower pace in June, a survey showed on Friday, mainly weighed down by weaker activity in the services sector, where the rate of expansion fell to a five-month low.

Markit’s flash composite Purchasing Managers’ Index (PMI), which tracks the manufacturing and services sectors that account for more than two-thirds of the economy, fell to a four-month low of 56.1 from 57.4 in May.

The reading undershot the consensus forecast in a Reuters poll of economists but remained well above the 50 mark that separates growth from contraction. Markit said that despite the fall, the reading still pointed to a strong growth in Europe’s largest economy.

“The headline output index for Germany declined for the second time in three months during June, according to the flash estimate, but nevertheless remained at a level indicative of strong economic growth,” said Markit’s Trevor Balchin.

He added: “The average reading for the second quarter, at 56.7, was the highest since the second quarter of 2011.” Activity in the manufacturing sector slowed slightly, with the index falling to 59.3 from 59.5 a month earlier. The services sector index fell to 53.7 from 55.4 in May.

Strong demand from Europe, America and Asia translated into growth in new orders for the sixth time in seven months. New orders grew at the fastest pace since March 2011. “The latest data signalled a growing performance gap between manufacturing and services,” said Mr Balchin. “The goods-producing sector continued to outperform, with the headline PMI little-changed from May’s 73-month record,” he said.

“Although growth of manufacturing output, exports and jobs all eased slightly since May, expansions in backlogs and total new orders gathered pace and supply bottlenecks intensified.”

Markit’s figures chime with data pointing to accelerated growth in Germany this year. The Ifo economic institute this week lifted it growth forecast to 1.8 per cent from 1.5 per cent, citing vibrant domestic demand and strong export growth fuelled by a recovery in the euro zone. Markit expects the economy to expand by 2 per cent this year, which would be the highest rate since 2011.