Sport has its own version of the CD album: come for the Premier League, stay for carp fishing and canoeing 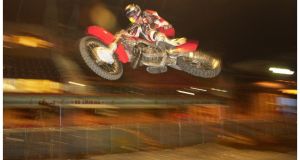 It was a Tuesday afternoon and I had a breakdown in the Lemsip war room. This is not as dangerous as it sounds. Marketing people like to couch what they do in military terms because it lends drama to what otherwise might be perceived as just a bunch of bearded millennials whining on about powdered decongestant. On the white boards around us were phrases like “storytelling arc”, “data led decision making” and for reasons we’ll come to in a moment, “Martina Hingis”.

The job we’d been given was to attack Lemsip’s market leading position via the thrillingly counterintuitive route of women’s tennis. The client – “a disruptive challenger brand” – had recently paid through the nose for some tennis rights. These were not for premium events you’ve ever heard of. They were “filler content”, the stuff that populates minority sports channels most afternoons, watched by a demographic of pensioners, people in bank queues and low risk prisoners on day release.

“What about a subscription service?” said Millennial number 3. “My mum buys her Nespresso on a monthly contract: why don’t we do the same thing with cold remedies, and the tennis could be thrown in as added value content.”

This is not a new idea. In fact, the answer to virtually every marketing challenge in 2020 takes the form of, “what about a subscription service?”. And the question that is now obsessing the sports industry is simple, how many is too many?

Most of us are already juggling multiple accounts, from the established names such as Netflix, Spotify, Amazon Prime and The Irish Times through to more niche entertainment sites, gym memberships, mindfulness apps and further still into FMCG categories such as pet food and beauty products.

Sport has got the memo and, in the pre-Covid-19 era, a new business model for governing bodies and event owners was emerging that sees them streaming sport direct to fans via so-called Over The Top (OTT) channels. There are new OTT offerings announced on an almost weekly basis, either by individual sports or specialist streaming businesses such as DAZN, which offers wall to wall boxing at a fiver a month, while La Liga TV is doing the same for Spanish football.

Now coronavirus threatens to accelerate change just as the sports economy starts to reshape its relationship with television. Last week several broadcasters turned off the money tap, refusing to pay rights for live sport that is no longer taking place.

Unlike the music business, sport has never had a Napster moment.

You’ll remember Napster as the file-sharing site from the first dotcom boom which changed the music forever, allowing people to listen to individual songs without paying for the whole album. Four months after its June 1999 launch, 150,000 people had signed up. By February 2001, it peaked at a verified 26.4 million users, with some estimates topping 80 million.

It’s not a perfect analogy by any means, but the experience of the music business has a couple of pointers for sport’s digital transformation.

Napster and file-sharing technology was about the fundamental mismatch between what the punters wanted to buy and what the industry wanted to sell. In music’s case, the CD album was the major casualty as streaming revealed it to be a few hit songs bundled together with a bunch of B-sides.

Sport has its own version of the CD album: the traditional multi-sport subscription package as sold by Sky, ESPN and Setanta among others. Pared down to its bare bones, these subscriptions bear a passing resemblance to the CD album: Come for the Premier League, stay for carp fishing, canoeing and the European Speedway Championship from Gdansk.

“There are only two ways to make money in business,” said Jim Barksdale, creator of Netscape. “One is to bundle; the other is to unbundle.”

Looked at through Barksdale’s lens, sport is a series of bundles held together by commercial rights deals and history. Only last week, Andrea Agnelli, scion of the Fiat and Juventus empires, pushed to close the UEFA Champions League to all but a few super rich clubs, including his own. A couple of weeks ago, Rory McIlroy questioned the wisdom of the world’s best golfers seeking to leave the European and PGA Tours to join a new, untried bundle, the Premier Golf League, funded by Saudi money.

Across the sporting calendar, the next few weeks will show how secure sports bundles really are, as streaming technology and now coronavirus threaten to do for the media rights market what Napster did for album sales.

But for all the talk of technology and business models, the most compelling lesson from music’s Napster moment was cultural.

Through arrogance or fear, the big record labels resisted the tide of change until they became overwhelmed. Today, many sporting bodies below the top tier are in a fight for relevance and they’re not known for their corporate agility and forward thinking.

In 2000, the harsh commercial reality began to dawn on even the big music labels, which faced a collapse in revenue. “A man from one of the majors banged the table,” recalls one exec at the time, “and said the answer was to ban the internet.”