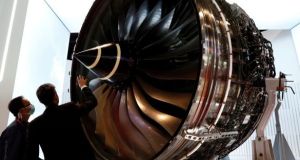 Rolls-Royce is scrapping its targets and final dividend to shore up its finances as the British aero-engine maker’s customers around the world ground planes due to the coronavirus pandemic.

Rolls, one of Britain’s most historic industrial names, which before the coronavirus crisis struck was trying to emerge from a multi-year turnaround plan, has suspended its dividend for the first time since 1987.

The company’s engines power Airbus and Boeing’s widebody jets but more than 60 per cent of that fleet is now grounded, according to aviation data provider Cirium.

Rolls-Royce is paid by airlines based on how many hours they fly. Over the last six weeks, the headwind from coronavirus was about £300 million, Rolls-Royce said, on flying hours which were 50 per cent lower in March and expected to deteriorate further in April.

Chief executive Warren East said the company’s focus was on strengthening its financial resilience, and as such it would be looking at cutting its cash expenditure, including reducing salary costs across its global workforce by at least 10% this year.

Rolls-Royce also said on Monday it had secured an additional £1.5 billion revolving credit facility, bringing its overall liquidity to £6.7 billion, to give it headroom during a potential prolonged downturn.

Withdrawing its previously announced guidance for 2020, and noting the ongoing uncertain outlook, Rolls-Royce said its board was no longer recommending its final dividend in respect of 2019, saving £137 million.

The company said actions to reduce costs, including on non-critical capital expenditure projects and salary cuts and deferrals for senior managers, would have a cash flow benefit of at least £750 million this year.

Rolls-Royce also warned it was anticipating a reduction in engine delivery and maintenance and overhaul volumes, affecting its revenues in the longer term. The group’s power systems business, which supplies industrial customers, is expected to weaken this year, the company said.

Jefferies analyst Sandy Morris said that Rolls’s update should give investors confidence in the company’s ability to cope with the downturn.

“There is plenty of liquidity. There are no worrying developments,” he said.

Shares in Rolls were up 13 per cent at 284 pence in early trading. The stock has lost 55 per cent over the last month.

Rolls-Royce relies on aerospace for just over half of its annual revenues, which were around £15 billion in 2019, deriving the rest from its defence and power systems businesses.